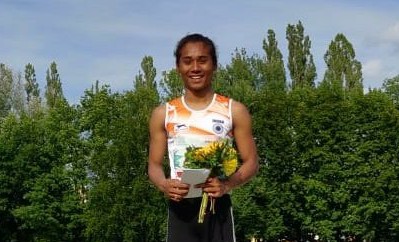 It was Hima’s 5th Gold Medal in World Athletics arena in the last 18 days. Earlier, she won the 200m race at the Tabor Athletics Meet in Czech Republic. Hima clocked 23.25 seconds to clinch Gold.

Hima may add another Gold to her kitty, as the Silver Medal won by the Mixed 4×400 Relay team at 2008 Asian Games in Jakarta could be upgraded to Gold as one of the Gold Medal winning Bahrain team members – Kemi Adekoya failed the dope test and handed over a 4-year ban. Official confirmation is awaited.