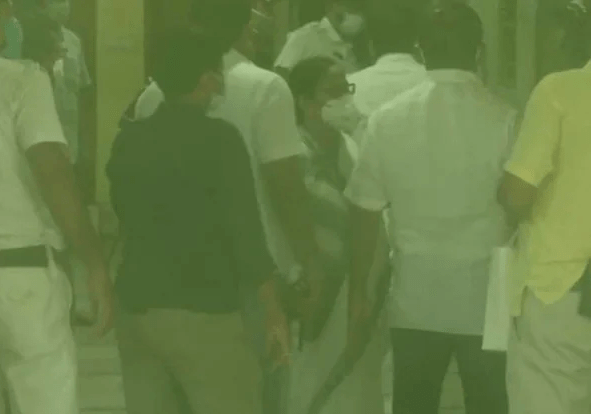 TNI Bureau: The arrest of 4 leaders (including 2 TMC Ministers & one MLA) in 2016 Narada Sting operation case, has triggered a political storm in West Bengal.

The arrested leaders included Ministers Firhad Hakim & Subrata Mukherjee, MLA Madan Mitra as well as former party leader Sovan Chatterjee. Although they were released on bail hours later, India witnessed the courage of Mamata Banerjee, who despite being the CM, rushed to the CBI office and spent 6 hours there, putting the central agency on back foot.

With Mamata holding her fort, her supporters gheraoed the CBI Office and even clashed with the security personnel. Mamata stood rock solid with her Ministers/MLAs and put the CBI sleuths in a fix.

All four TMC leaders were granted bail later after the CBI did not seek their custody!

While these 4 leaders have been arrested, there is no word on Leader of Opposition Suvendu Adhikari and Stalwart Mukul Roy. They are equally accused in this case and we’re caught on camera while taking bribe.

Mathew Samuel, the man behind Narada Scam is surprised. He had recorded Suvendu Adhikari receiving bribe from him and it was shown on TV channels.

Suvendu is roaming free as Lok Sabha Speaker is sitting on the prosecution sanction request since April 2019. As Mukul Roy ceases to be a Rajya Sabha MP, it won’t be difficult to prosecute him if there is an intent.

The Trinamool Congress is adamant on the arrest of Suvendu and Mukul Roy. Was CBI deployed to check the possible exodus from BJP as many turncoats are expected to switch sides again?