The violent turn of events caused extensive damage to the movement. 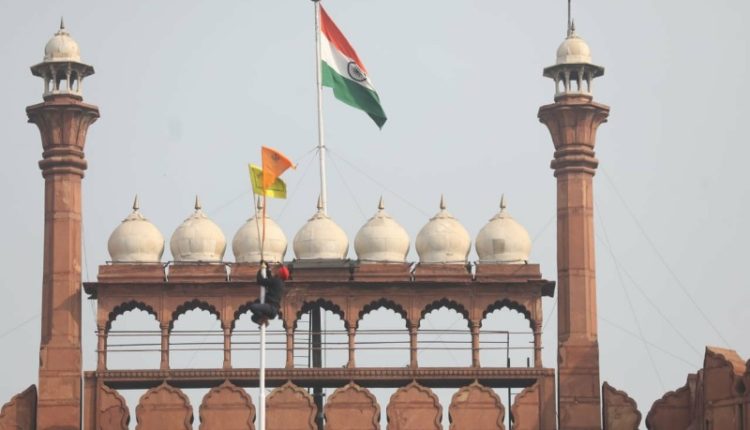 TNI Bureau: The agitating farmers not only deviated from their designated routes on Republic Day, but also from their core objective, thus damaging their movement knowingly or unknowingly. As their protests turned violent, their credibility hit a bottom low.

However, contrary to the reports that a Khalistani flag was hoisted at the Red Fort, it’s Nishan Sahib, the holy Sikh Flag. The Nishan Sahib, is usually hoisted outside a gurdwara. Although Tiranga was not replaced and it continued to fly high atop Red Fort, there was hardly any need to hoist the Nishan Sahib. When it comes to Nationalism and Patriotism, Tiranga is irreplaceable.

Again, the disrespect shown to Tiranga by a youth as seen in the visuals, was highly disturbing. To hoist the Nishan Sahib, he threw the Tricolor offereed to him by another protester. The act may be unintentional, but it caused serous damage to the farmers’ movement. This happened despite the fact that hundreds of farmers carried Tiranga while marching towards the Red Fort.

There is no justification to violence. Whatever happened in Delhi during the Tractor Rally, has discredited a peaceful movement forever.

Even, hardcore supporters of the farmers have taken them to task. Things won’t be the same for them going forward. Whether they were provoked by the Delhi Police or not, the world may not believe them again.

Nobody talks about the hundreds of farmers getting injured in the violence, but injuries to 83 policemen are being reported heavily.

Visuals of farmers beating up Cops, trying to run over the tractors on them and disregard to Tiranga, have turned the public against the protesting farmers, making things easier for Union Home Minister Amit Shah to step in and act.

The farmers’ protest that was peaceful for more than 60 days, is now on the verge of collapse. They are losing their support base across the country. The Supreme Court, which refused to intervene earlier, may act tough now.

And, last but not the least, the Big Boss Amit Shah is smiling. He is probably having the last laugh. He successfully built a public pressure on himself to act and end this protest. Things have become easier for him now.