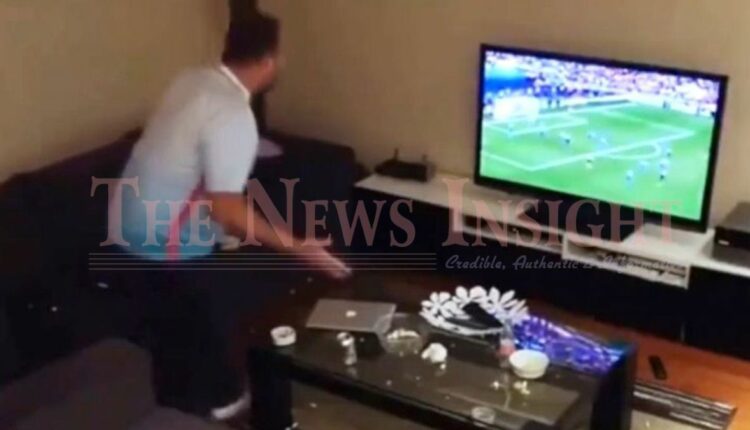 National Meme: India made an impressive start to their T20 World Cup campaign by defeating bitter foe Pakistan by four wickets in a nail-biting last over match yesterday. With this victory, India avenged their humiliation to the Men in Green in the T20 World Cup last year in Dubai. Indian supporters cheered the victory, but Pakistani supporters found it difficult to digest the loss. One such fan reaction was shared by Virender Sehwag on Twitter which showcased a man smashing his TV.

Sehwag’s tweet read as follows- “Relax Padosi (Relax Neighbour), it’s only a game. Hamaare yahan (we are celebrating) Deepawali hai toh pataakhe phod rahe hain (so we are bursting crackers) aur aap bevajah TV 📺 phod rahe hain (You are breaking your TV for no reason) 🤣. Nahin yaar, TV ka kya kasoor (What is the fault of your TV).” The Tweet garnered around 1lakh likes and 14thousand retweets, which made everyone giggle.

However, the TNI Research team found that the supposed video claimed to be a Pakistani fan breaking his television set is an old video of a Turkish football fan, who reportedly smashes up his flat-screen TV upon his team’s loss at the 2016 Euro-cup.

The man in the video Izzet Salti wished for some silence when he settled in to watch an eagerly anticipated Euro 2016 match. The man turned on the television to see his nation’s opening match against Croatia held in France. But as the match went on, Mr. Salti became agitated because Turkey was unable to score a goal. He lost his cool when his girlfriend questioned him and insisted that she leave the room. The man’s spouse came up with a terrible joke to get back at him since she was offended by his aggressive demeanor. She recorded herself expressing a plan to trick her partner by controlling the television using a special smartphone app.

The clever prank is captured on hidden camera footage when Mr. Salti switches his attention to the second half of the game. While Mr. Salti is watching the game alone, the TV abruptly and mysteriously turns off. He stands up in bewilderment and scrambles to locate the remote control. Additionally, the Turk attempts bashing and banging the flat-screen television’s back. Before the video fades off once more, the TV automatically comes back on, and Mr. Salti resumes watching the game. The lover gets more and more irate as the interruptions persist until losing it altogether.

The fan even throws his laptop at the TV at one point, which causes it to crash on the floor. After smashing up his flat-screen TV and his laptop, Mr. Salti continues. After the drama is over, the girlfriend enters to chastise her lover for wrecking their living room. Turkey fell 1-0 to Croatia.

The tweet attracts a large number of audiences. Where netizens were also relishing Sehwag’s tweet. Besides, this he has been tweeting memes against Pakistan ever since India won the game on Sunday night. On the other hand, the Video of the Turkish fan has been circulating across social media in India taking on account of Sunday’s match.

Fill in the blanks.#IndvsPak #TeamIndia

In PICs: Kali Puja In Cuttack