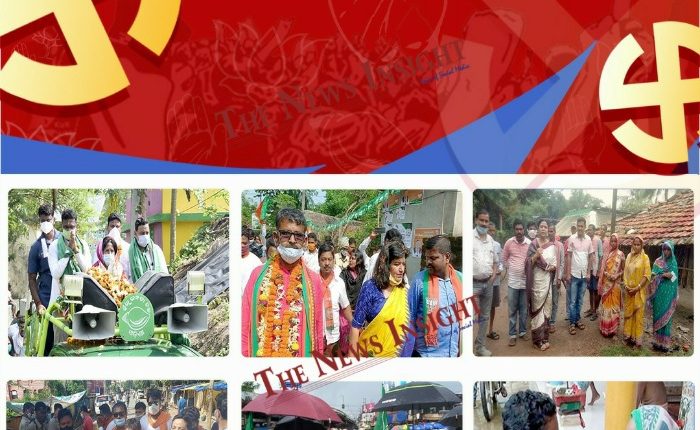 TNI Bureau: Despite Corona Pandemic, the political parties in Odisha had an extensive campaign for the upcoming assembly bypolls in Balasore Sadar and Tirtol on November 3. With CM Naveen Patnaik and Union Minister Dharmendra Pradhan joining the poll battle, things have become very interesting now.

The BJD has gone all out to make a clean sweep and win both Balasore Sadar and Tirtol. However, the BJP has set its focus on Balasore Sadar and is trying its best to retain the seat, using all kind of strategies, mostly the emotional appeal from a mother for her bereaved son.

BJP holds the edge in Balasore thanks to the emotional pitch by wife of late Madan Mohan Dutta, who is leaving no stones unturned to turn the tide in her son Manas Ranjan Dutta’s favour. Union Minister Pratap Sarangi and Bhubaneswar MP Aparajita Sarangi are leading the poll campaign while Union Minister Dharmendra Pradhan is giving as much time as he can despite having a busy schedule due to Bihar elections.

However, BJD, which is known for effective poll management and turning the game at any point of time, has deployed all its resources in Balasore Sadar. Around 100 BJD leaders including Ministers, MPs, MLAs and others have camped in Balasore to ensure victory of the BJD candidate Swarup Kumar Das.

Despite Rabindra Jena’s “rebellion” in the initial stage, situation seems to be under control now. There is a tough fight in Balasore Sadar between BJP and BJD while Congress candidate Mamata Kundu is lagging behind despite good efforts from the leaders and workers. While BJD and BJP and putting their might to win, the ruling party may be able to score a point over the saffron party if the latter fails to manage the situation in the last two days.

There won’t be any surprise if BJD pulls off an upset victory in Balasore Sadar. However, if BJP wins, stature of Aparajita Sarangi may rise in Odisha BJP, as she is giving more time and efforts in Balasore and leading the campaign from the front.

There is nothing much left in Tirtol for the opposition parties. Late Bishnu Das had a great followers base in Tirtol and his son Bijay Shankar Das is way ahead of his rivals despite the taints of 2007 marksheet scandal that forced his father out of the Naveen Cabinet. Bishnu Das, then School and Mass Education Minister, had to resign following that controversy.

Much water has flowed under the bridge since then. The Class X student is a youth now and carries his father’s rich legacy. His rivals are much better than him when compared to political maturity and experience, but it’s difficult to defeat BJD under Naveen Patnaik as well as Bishnu Das’ legacy in Tirtol.

Rajkishore Behera (BJP) and Himanshu Sekhar Mallick (Congress) are putting all their efforts to give a tough fight to the BJD candidate. BJP is definitely ahead of the Congress because of the strength and popularity of Rajkishore Behera who pulled most Congress votes into BJP fold. But, the party is not able to match the BJD yet. If we compare all the candidates, Congress candidate Himanshu Sekhar Mallick is most qualified, efficient and able. But, he may still finish third in this power battle unless there is a miracle.

We predict a BJD win in Tirtol. Only the victory margin can be debatable here. In Balasore, both BJP and BJD are locked in a close fight. It’s a tough call, as the victory margin may be very less. But, it won’t be a surprise if BJD secures a clean sweep in the assembly bypolls by winning both Tirtol and Balasore Sadar. The time period of November 1-3 will be very crucial for both parties.