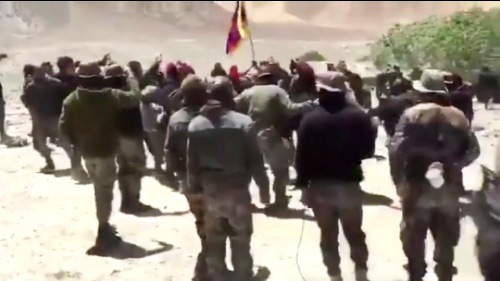 TNI Bureau: With Chinese are in no mood to go back and trying hard to alter the status quo on the LAC, India has reportedly unleashed its warriors – the Special Frontier Force (SFF) to counter the PLA although it won’t be revealed officially.

While the Chinese tried incursion on the Southern banks of Pangong Tso, the SFF has taken control of some dominating heights in the area. The entry of SFF, mostly comprised of Tibetans in India, has stunned the Chinese further.

PLA had eyed those heights to gain strategic advantage. But, India gained control using SFF, thus denying China the upperhand. With those heights in its kitty, Indian Army is now moving additional troops to the region.

As the SFF Warriors bay for the blood of the Chinese, thanks to their Tibetan roots, it won’t be easy for the PLA soldiers to match them when it comes to their passion and aggression. They just want freedom for Tibet by crushing the Chinese. It’s a very strategic move by India to put China on the back foot.

The Special Frontier Force (SFF) was founded on November 14, 1962 on the instructions of then PM Jawaharlal Nehru to conduct covert operations behind Chinese lines in the event of another Sino-Indian War. Nehru had given the nod following a hectic lobbying by Intelligence Bureau officials.

With over 10,000 active personnel, the SFF later became part of the Research & Analysis Wing (RAW). They are well trained in guerilla warfare and can fight in extreme adverse conditions.

The SFF has its home base at Chakrata, 100 km from the city of Dehra Dun. The Special Frontier Force was used in 1971 Bangladesh Liberation War, Kargil War and various other internal operations like ‘Operation Bluestar’ in 1984.

After 1975, SFF was restrained and prohibited from being deployed within 10 km of LAC after they were found to be conducting unauthorised cross-border raids and intelligence operations. Over the years, India tried to improve the relations with China and kept the SFF away.

With India bringing back the SFF into operations now and offering tacit support to the Tibetan cause, the Chinese would be under tremendous pressure to retreat or maintaining the status quo on the LAC.

India does not want to take any chances now, as China has been building missile launch sites at various places bordering India, Nepal and Bhutan – from Kailash Mansarovar to Shigatse, Pagri and Nyingchi.