In a letter to Delhi L-G VK Saxena, jailed conman Sukesh Chandrasekhar claimed that Satyendar Jain, an Aam Aadmi Party (AAP) minister, received Rs 10 crore from him as “protection money,” in exchange for privileges in jail.

Con artist Sukesh alleged to have known the AAP leader since 2015 in the letter. According to the letter, the AAP received a total payment of Rs 50 crore after promising him a key party position in south India.

Chandrasekhar asserted that he had informed a CBI investigation team about the payments made to Jain, the AAP, and D-G Prisons last month and that he had petitioned the Delhi High Court to request a CBI investigation. Sukesh requested that the case be dropped and stated that Satyendar Jain had been threatening him even while harassing and assaulting him.

“After my arrest in 2017, I was lodged in Tihar Jail and was visited multiple times by Mr Satyendar Jain, who held the portfolio of jail minister… In 2019 again, I was visited by Jain, whose secretary asked me to pay Rs 2 crore every month as protection money and to get basic facilities inside the jail,” Read the letter that Chandrasekhar sent through his attorney. 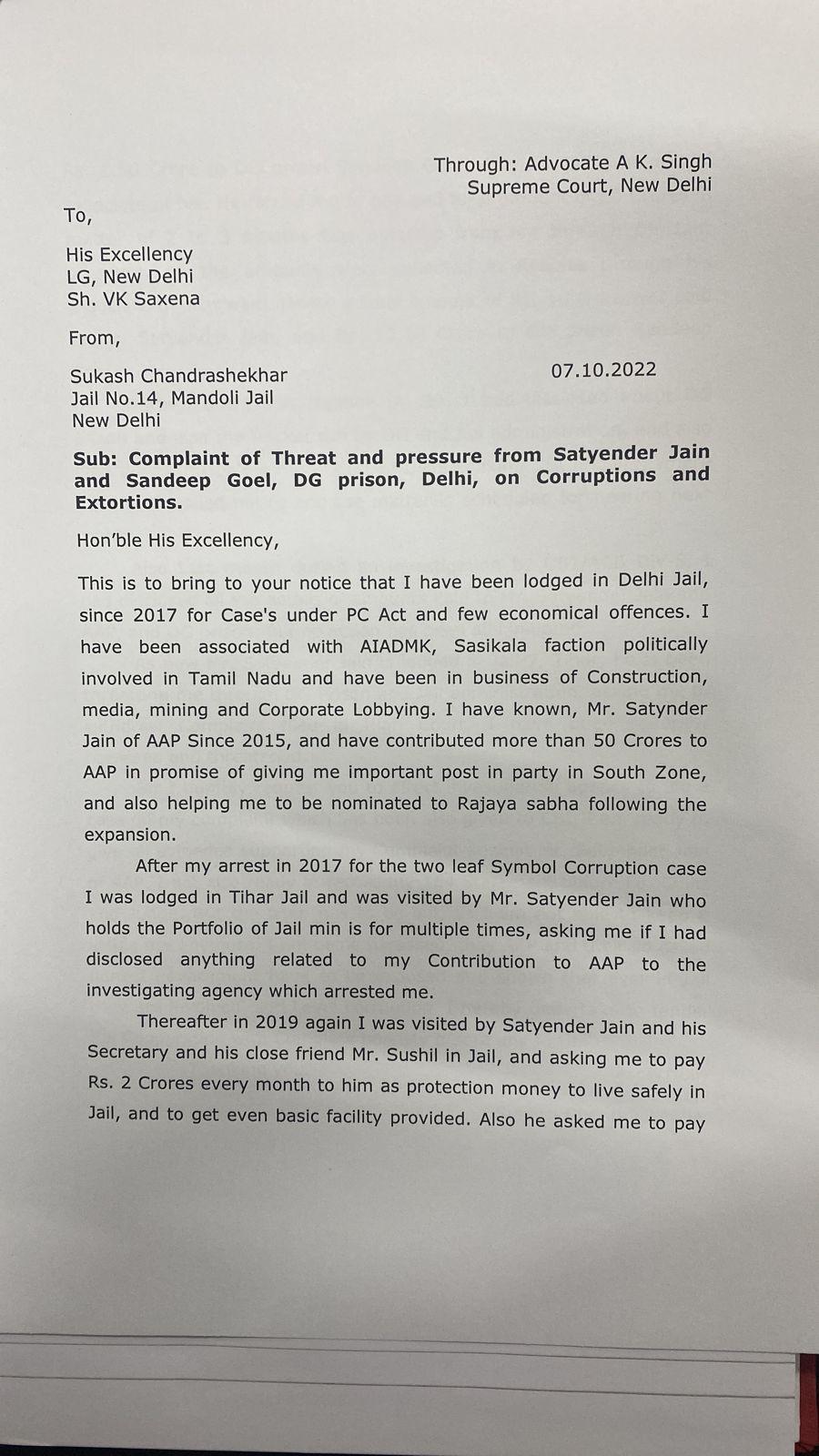 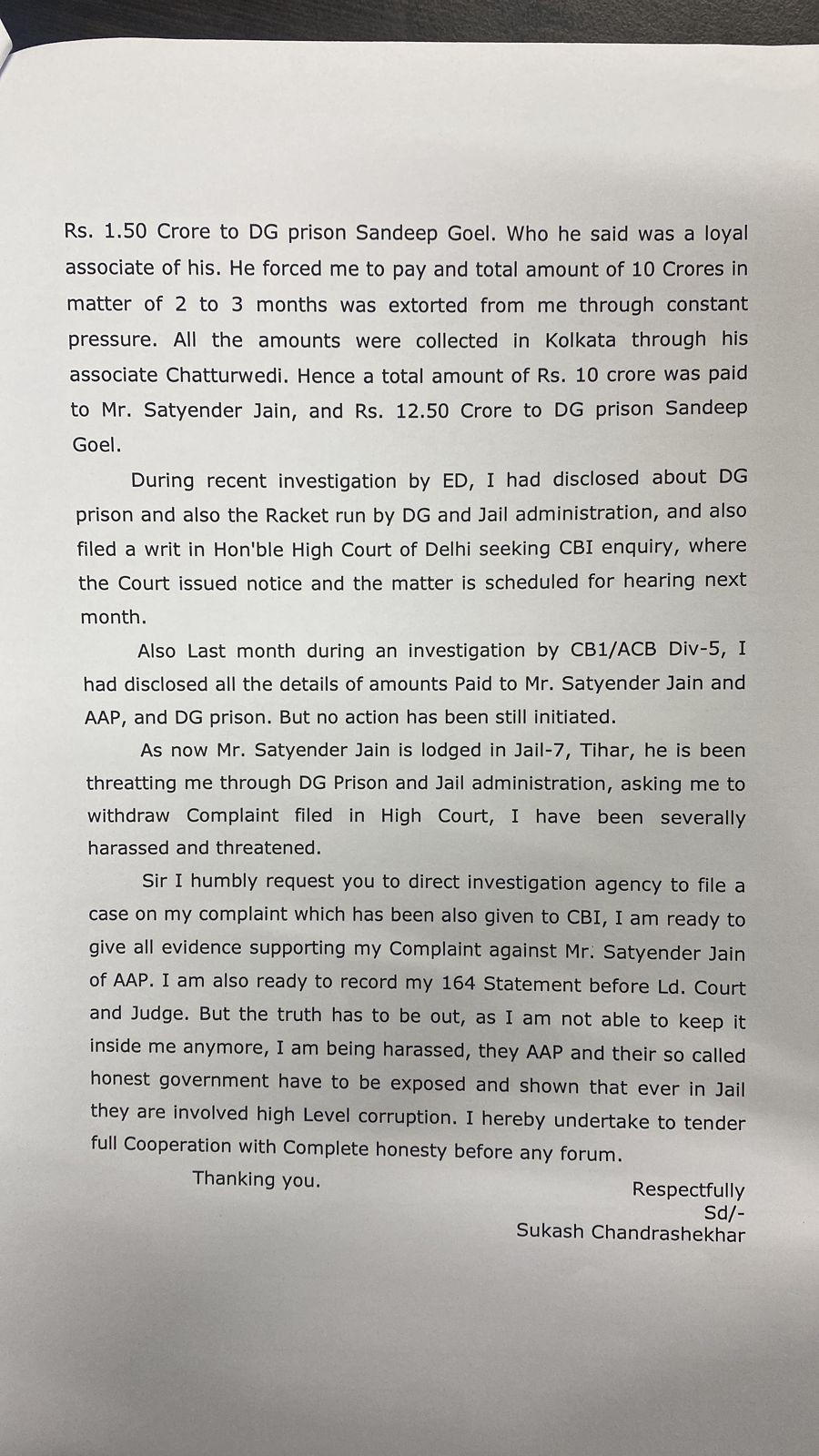 Sukesh Chandrasekhar is detained in Delhi’s Mandoli jail on charges that he tried to extort cash from prominent figures and celebrities. He was initially detained at Tihar jail, but after making numerous requests, he was moved. He had stated that the Tihar prison had threatened him with death.

“After my arrest in 2017 for the two leaf Symbol Corruption case. I was lodged in Tihar Jail and was visited by Mr. Satyender Jain. Who holds the Portfolio of Jail min is for multiple times. Asking me if I had disclosed anything related to my contribution to AAP to the investigating agency which arrested me. Thereafter in 2019 again I was visited by Satyender Jain and his Secretary and his close friend Mr. Sushil in Jail and asking me to pay Rs. 2 Crores every month to him as protection money to live safely in jail. And to get even basic facility provided,” the letter further revealed.

According to sources, L-G VK Saxena of Delhi. Further  forwarded the letter to the chief secretary of the AAP government for further action. The home department of a Delhi government will take further steps in the case since it involves the Tihar jail.

Meantime, Delhi’s health minister Satyendar Jain was also detained by the Enforcement Directorate. Earlier this year, On May 30. The ED detained Jain in connection with a different criminal investigation involving alleged hawala transactions.

BJP Takes a dig at AAP:

Hours after Conman Sukesh approached the Delhi LG, the  Bharatiya Janata Party (BJP) on Tuesday alleged that Sukesh has claimed to have paid ₹10 crore to minister Satyendra Jain as protection money in exchange for privileges in jail and similarly a ₹50 crore to the Aam Aadmi Party (AAP) for a Rajya Sabha berth.

Earlier in the day, BJP Spokesperson Sambit Patra said in a Press briefing that. “The AAP also extorted the conman who gained 200 crores in fraud and extortion while he was imprisoned. Numerous allegations have been made against him, and his buddy and fellow health minister Satyendra Jain. Who is currently in jail”

He added that Chandrasekhar had been guaranteed a berth in the Rajya Sabha. And that he would become a prominent figure in the South. Patra claimed that a party had demanded 50 crores from him. And had promised to alter the political landscape in India. Patra added
“He alleges that Jain’s secretary demanded 2 crore as monthly protection money. and he made a payment of Rs. 10 lakhs. Sukesh and another were both heading a criminal organization from inside the prison. … To suggest the AAP is a conman party is not an exaggeration”
Aam Admi PartyAAP GovtCBIConman SukeshSatyender JainSukesh Chandrashekhar
Share FacebookTwitterWhatsApp