‘Pathaan’ Teaser Out; SRK Fans say ‘King is Back’

Shah Rukh Khan's Pathaan teaser, which was released on his birthday, has won over fans. Fans of the Bollywood superstar SRK were in for a treat when he released the trailer for his upcoming movie. 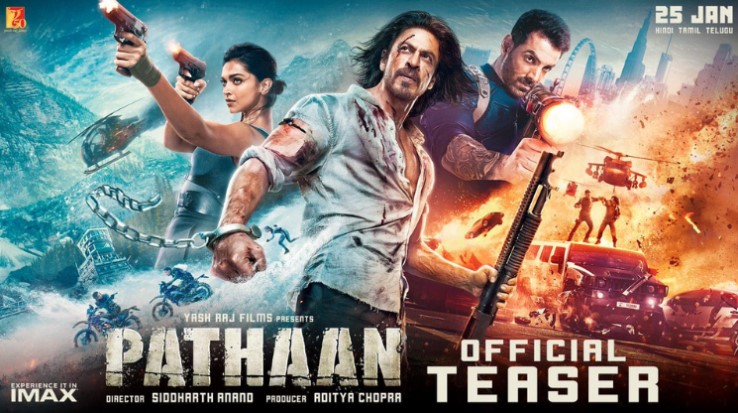 TNI Bureau: Shah Rukh Khan’s Pathaan teaser, which was released on his birthday, has won over fans. Fans of the Bollywood superstar SRK were in for a treat when he released the trailer for his upcoming movie. Shah Rukh offered Pathaan his best because it was his first leading part in four years. The Pathaan video, which features intense action scenes, gore, and SRK’s charisma, has raised interest in the forthcoming Bollywood film, which also stars Deepika Padukone and John Abraham.

Shah Rukh Khan took to Instagram to unveil the teaser and shared it as follows: “The Pathaan teaser is now available! Apni kursi ki peti baandh lijiye (Fasten your seatbelts)! On January 25, 2023, celebrate Pathaan with YRF50 only at a theatre near you. releases in Telugu, Tamil, and Hindi.”

This is Deepika Padukone and SRK’s fourth joint venture, pathaan. In the 2007 Bollywood film Om Shanti Om, Deepika Padukone made her acting debut alongside Shah Rukh Khan. They then starred in the box office successes Happy New Year and Chennai Express. John Abraham and SRK will be seen on screen together for the first time in this movie.

On January 25, 2023, the Siddharth Anand-helmed film Pathaan, which is being made by Yash Raj Films, will be released in Hindi, Tamil, and Telugu.

Pathaan: Several fans took to twitter and praised the sweet surprise and expressed their delight at seeing SRK in an action role. What they have to say is as follows:

The Yash Raj Films spy universe’s Pathaan, which is hailed as a visual marvel, also stars Deepika Padukone and John Abraham. One of Bollywood’s most adored on-screen duos is SRK and Deepika. In Mallorca, the two had just finished shooting a massively popular song. As Deepika showed off her flawless bikini body and SRK flashed his eight-pack. The schedule was completed on March 27 when they travelled to Cadiz and Jerez in Spain.