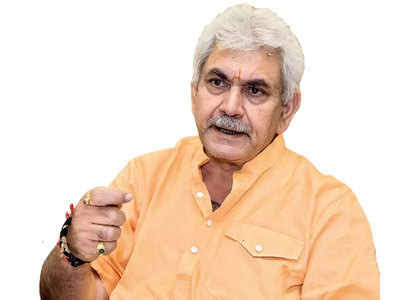 TNI Bureau: A day after the historic Bhoomi Pujan for the Ram Mandir in Ayodhya, which will be built under the direct supervision of Uttar Pradesh CM Yogi Adityanath, BJP stalwart from Uttar Pradesh, Manoj Sinha has been appointed as the Lt. Governor of Jammu and Kashmir following the resignation of Girish Chandra Murmu.

The move is a reward, a special gift for Adityanath, who has emerged as an undisputed leader in UP politics.

Manoj Sinha, very close to Modi & Shah, had almost occupied the UP CM’s chair in 2017, but for a last minute change.

The IIT-BHU almnus is known as a ‘Vikas Purush’ in Uttar Pradesh. His vast political and administrative experience and non-controversial image have made him an acceptable figure in the political circle as a well as among the masses.

As Murmu is an efficient Bureaucrat and enjoyed confidence of PM Modi, he was appointed as the CAG of India – a post with bigger responsibility.

But, whether we admit or not, Girish Chandra Murmu failed to take everyone on while at the helm of affairs. Some of his recent comments on 4G and Elections, even angered the Modi Government. Murmu lacked the political acumen being a bureaucrat. He was not even on the same page with the Chief Secretary who is in the good book of HMO.

Manoj Sinha is expected to fill that vacuum. Having the vast political and administrative experience, he may be able to reach out to the Kashmiris as well as the politicians in the valley to strengthen the reconciliation process.

Manoj Sinha is a prominent Bhumihar leader of Eastern Uttar Pradesh, close to Bihar. Considering the influence of Bhumihars in Bihar, which is going to the polls later this year, it’s seen as another strategic move by BJP to woo the Bihar voters, particularly the upper caste.

‘No School, No Fee’: Odisha Congress ups the ante