Opinion: “Piloting” is Not Congress’ Cup of Tea 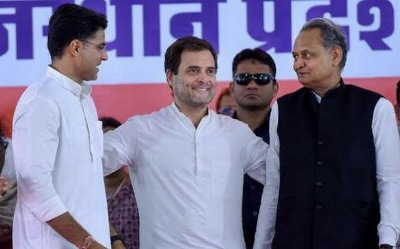 TNI Bureau: Whether Sachin Pilot is revolting or just using pressure tactic, does not matter. It does not matter if he succeeds in his “ultimate design” or not. What matters is the lack of urgency being shown by Congress leadership. It miserably failed to keep the flock together, thus allowing the rivals to fish in the troubled waters.

At a time when the country needs a strong Opposition along with a strong Government, the Congress under the Gandhi’s has turned out to be the biggest disappointment. Under a lackluster leadership, the Congress Party is sinking further every passing day.

They lost Karnataka and then Madhya Pradesh despite forming the governments. They lost a Young Warrior like Jyotiraditya Scindia, who played a big role in Congress’ revival in Madhya Pradesh. Now, the political game has been shifted to Rajasthan. The revolt is on the predicted lines. Sachin Pilot has been upset ever since Congress returned to power in the State. There is no love lost between him and Ashok Gehlot. The Deputy CM’s post for Sachin Pilot neither satisfied him nor made Gehlot comfortable.

All in the Congress including Sonia Gandhi and Rahul Gandhi have been aware of the bitter power tussle between Gehlot and Pilot, but never tried to resolve it. Same happened in Madhya Pradesh when they ignored Jyotiraditya Scindia who later jumped into the Lotus Pond.

It’s very unfortunate to see two Young Guns like Jyotiradiya Scindia and Sachin Pilot (who were seen as the Pillars of the “New Congress”) being treated this way. One Wicket is already down and the other one may follow suit. If Sachin Pilot departs and joins the BJP, the Congress will become a laughing stock in the country and will lose whatever credibility it has today.

With people like Sanjy Jha, Karti Chidambaram, Kapil Sibal and many others expressing concerns over the way the party functions today, the message is loud and clear. But, Leaders at the helm of affairs fail to get it. They fail to inspire too. The Congressmen are either confused or leaving the sinking boat.

Congress may still save Rajasthan (which looks unlikely unless it gives in to Pilot), but there is no guarantee that such revolts do not occur again. Congress may convince Pilot, but piloting a State or Country no longer remains its Cup of Tea, as evident from the recent developments. The party needs a big overhaul, but may not take the plunge for obvious reasons.