Joe Biden sworn-in as the 46th President of the US. 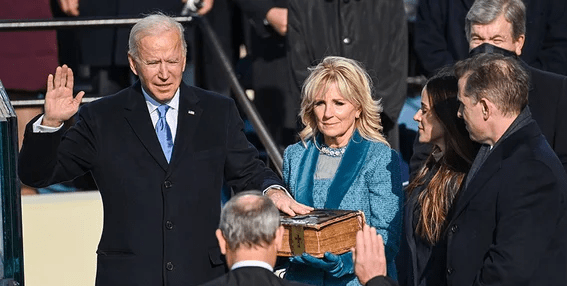 TNI Bureau: “This land is your land and this land is my land, from California to the New York island, from the redwood forest to the Gulf Stream waters. This land was made for you and me”.

The star-studded inauguration of Biden’s presidency had the likes of Lady Gaga, Jennifer Lopez, Garth Brooks, The New Radicals, Jeff Bradshaw, Patricia Treacy. The inauguration started with Lady Gaga singing the national anthem of America in her beautiful voice.

National Youth Poet Laureate Amanda read her touching poems that connected well with the audience and she received a loud round of applause as soon as she ended. Rev. Silvester Beaman performed The Benediction prayer, an enchanting for divine blessings of God.

Biden took oath in the presence of Chief Justice of America John Roberts Jr. It was interesting to see outgoing Vice President Mike Pence present in the ceremony, but 45th President Donald Trump skipping it. By doing this, he broke the long standing tradition and  became the first president to not attend the inauguration after 1869. Among the former presidents, Bill Clinton, George Bush, and Barack Obama were present during the event.

Throughout the speech, Joe Biden emphasized on build a sound democracy, equality in society, and Unity across the world. He clearly said that “there is no place for racism and injustice in the New America. Justice will be given to everyone.” He hailed the ‘Victory of Democracy’ on his speech.

He also added, “World is in chaos and we need to be United. We need to be bolder and make a better future for our children. Disagreement doesn’t mean disunion. I’ll be president for All Americans and Together we can create history”.

It is a historical moment in the history of the country with Kamla Harris becoming the first Woman Vice President.

Biden repeated excerpts from Abraham Lincoln’s speech and urged people to come together as one nation and help the country achieve greatness again. President Biden offered silence for the victims of the Covid 19 pandemic in the country.