West Bengal Chief Minister blocking the Governor on the social media platform and the latter responding with a series of tweets on the “essence and spirit of democracy” and saying the CM’s move was “against constitutional norms”. 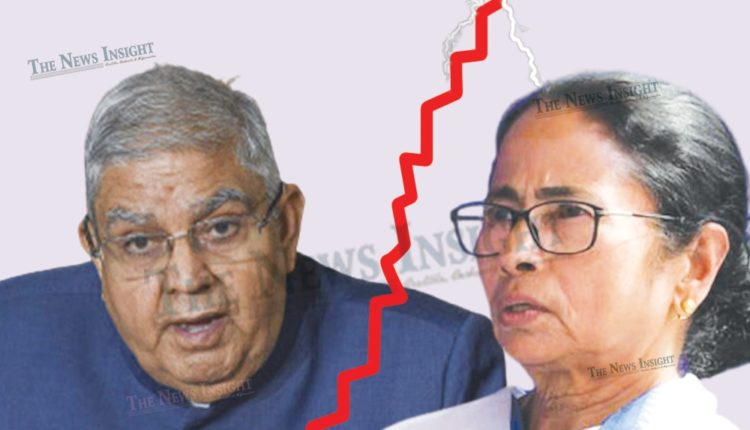 Insight Bureau: The open war between Mamata Banerjee and Jagdeep Dhankhar spilled over to Twitter on Monday. West Bengal Chief Minister blocking the Governor on the social media platform and the latter responding with a series of tweets on the “essence and spirit of democracy” and saying the CM’s move was “against constitutional norms”.

On Monday, after a Cabinet meeting at the secretariat, Banerjee spoke to the media and said she was “forced” to block Dhankhar on Twitter because of his “unethical and unconstitutional” statements. She also alleged that the Governor was acting like a “super guard” and treating Government officials like “his servants”.

West Bengal Governor Jagdeep Dhankhar’s conflict with the State Government over several issues in the last couple of months is the latest addition to the long history of such strained relation between the Governor and the West Bengal government.

TMC members in the Rajya Sabha accused 68-year-old Dhankhar of exceeding his limits and demanded his recall before walking out of the House. Rajya Sabha chairman Venkaiah Naidu had to censure them for the ruckus.
A few hours later, in Bengal, the government placed a notification in the state Assembly, divesting the governor of most of his powers as chancellor of state universities while TMC legislators staged another agitation, accusing Dhankhar of delaying crucial bills sent to Raj Bhawan for his assent.

For Dhankhar, who practiced law in the Rajasthan high court and Supreme Court before becoming an MP (1989-91) and legislator from Kishangarh in Rajasthan, this was a three-pronged attack. At a hurriedly called media conference at Raj Bhawan, he only defended his stand on the delay in giving his nod to a bill but kept quiet on the laws curtailing his powers as chancellor and the agitation in Rajya Sabha.

Dhankar summoned the state DGP to discuss law and order situation two days after taking oath on ‪on July 31‬. Officers said the violence at Bhatpara ‪on September 1‬, in which Barrackpore’s BJP MP Arjun Singh sustained head injuries, prompted Dhankhar to summon the DGP. ““Holding this Constitutional position, my objective is that we must believe in the rule of law and we must believe in peace. We must avoid violence and I am in pain looking at the violence,” Dhankhar said in a statement. TMC leaders did not react.

Dhankar rushed to Jadavpur University (JU) ‪on September 19‬ to rescue Union minister Babul Supriyo who was shown black flags and heckled by a section of students who also stopped him from leaving the campus. TMC secretary general and education minister Partha Chatterjee said Dhankar went to JU although chief minister Mamata Banerjee requested him not to do so and give the government time to control the situation. Dhankhar refuted the allegations of partisan behaviour hurled by TMC and asserted that he visited JU as a guardian after exhausting all avenues.

The confrontation between Dhankhar and TMC touched a new low in Siliguri town ‪on September 24‬ when no government official and Trinamool Congress leader turned up for a meeting called by him. Dhankhar was in Siliguri to inaugurate the new office of the Indian Chamber of Commerce. Only some opposition party leaders turned up. “This cannot be the kind of reception given to the governor who is the head of the state. I am not in a political circus and I have a hardcore constitutional role,” said Dhankhar.

35-year-old schoolteacher, his pregnant wife, and their son were hacked to death in Murshidabad district on October 8. BJP claimed that the man, Prakash Pal, was an RSS supporter. Dhankhar said the murders reflected the state’s law and order situation and sought a report on the killings. “I call upon the law enforcement agencies to pursue the culprits and bring them to book,” he said. Education minister Partha Chatterjee said, “Why is misinformation being spread about a family dispute? The governor should not cross his constitutional limits. We know what his intentions are.”

Dhankar said he felt “deeply hurt and disturbed” by the treatment meted out to him at a Durga Puja event hosted by chief minister Mamata Banerjee in Kolkata on October 11 . Dhankar was miffed because he was not seated at the main stage along with other guests at the event to showcase the top pujas in Kolkata. He also said he “was not shown on TV” for even a second.

The governor lashed out on seeing bureaucrats and local people’s representatives absent from back-to-back interactive sessions during his visit to the Sunderbans on October 22. “This is utmost disrespect to the highest office of the state and also its people. I find it absolutely unconstitutional. I am not a governor who sits in Governor House. I interact with people and discuss their problems.” The TMC said it saw no reason to respond to the governor’s statements every day.

Adding a new twist to his uneasy relation with Jadavpur University (JU), of which he is also the Chancellor, Dhankhar on October 27 invited the representatives of Jadavpur University Teachers’ Association (JUTA) to a meeting to discuss their demand of implementation of the University Grants Commission’s (UGC) pay scale. JUTA along with two other teachers’ bodies threatened a two-day cease work if the state government refuses to yield. TMC leaders did not comment.

West Bengal Governor Jadgeep Dhankhar on November 4 took a dig at the TMC government, alleging that many people had complained to him that their privacy was breached by the state administration. The remarks came a day after Mamata Banerjee alleged that her phone had been tapped by the Union government as well as a Bharatiya Janata Party (BJP)-ruled state. She had also alleged that the Centre was snooping on people. TMC said the governor was acting like a BJP leader.

Mamata Banerjee on November 14 waded into the row over the Maharashtra governor’s push for Central rule in the state but targeted Dhankhar as well. “I generally do not say anything on constitutional posts. But there are some people who are behaving like BJP mouthpieces. You have seen what is going on in my state. They want to run a parallel administration,” Banerjee said.

On November 14, Raj Bhavan said in a statement that Dhankhar would be making a 600-km road trip to the border town of Murshidabad from Kolkata and back because the Bengal government refused to let him use a chopper for attending the silver jubilee celebrations of Prof Syed Nurul Hasan College the next day.
Junior health minister Chandrima Bhattacharya said the state wanted to know why the helicopter was required. “The chief minister went for an aerial survey of the cyclone affected areas because the situation demanded it,” said Chandrima Bhattacharya.

The 70th Constitution Day on November 26 witnessed another showdown. Dhankar accused Mamata Banerjee of not showing him courtesy during the special assembly session and said he was left “bewildered” and “stumped” by Mamata’s behavior. “What struck odd about the strategy at the assembly was that the leader of the House, the Hon’ble CM, just kept aloof and took no step while I alighted or made way for floral tribute to Dr Ambedkar. I expected otherwise. Interacted with all who were open to it,” Dhankhar tweeted. It appeared to be a response to Banerjee’s claim that Dhankhar was discourteous to her. “Even the prime minister (Narendra Modi) does not behave like this. He speaks with a smile when we meet,” Banerjee told journalists after the Constitution Day event, in which Dhankhar and Banerjee virtually ignored each other.

The acrimony got worse on December 4, when Dhankhar visited Calcutta University (CU) for the first time only to find no senior functionary present to receive him. “You will not see this in any university in the world. I am the chancellor of this university and nobody is there to receive me. The room of the vice chancellor is locked. Education should be kept out of politics,” he said. “He (Dhankhar) is visiting universities because he wants to enforce the national education policy in Bengal. He will not succeed. He has to first acquaint himself with the soil of Bengal,” said education minister Partha Chatterjee.

On December 5, Dhankhar alleged that he was stopped from entering the state Assembly through the gate designated for the governor when he paid a visit although the session was adjourned. He entered the premises through another gate. “The governor’s gate being locked has put our democratic history to shame,” he told reporters.