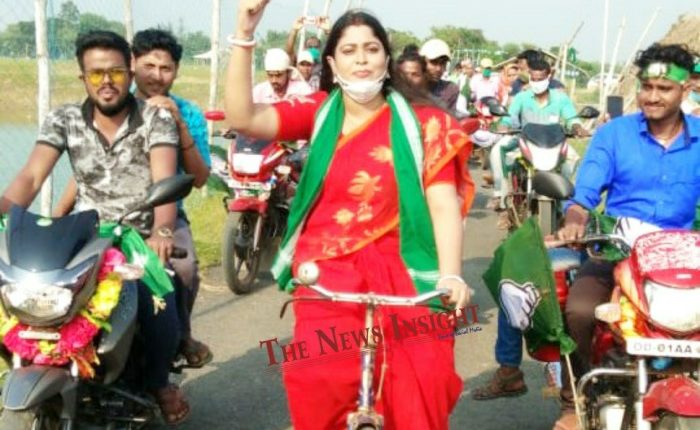 TNI Bureau: While Aparajita Sarangi of BJP is making a lot of efforts in the Balasore Sadar bypoll in favour of party candidate Manas Ranjan Dutta, Actor-turned-Politician and Secretary General of BJD’s Youth Wing, Elina Dash is creating a big buzz in the political circle of Balasore while campaigning for party candidate Swarup Kumar Das.

Elina is leaving no stones unturned to woo the voters with her unique approach. She is certainly getting popular among both men and women as hundreds of people are turning up to get a glimpse of her and listening to her voice.

Elina is leading BJD’s Female Brigade in Balasore Sadar and mingling with the people. Whether riding cycle, taking part in the bike rally or dancing with the crowd, she is gaining traction.

It’s a known fact that BJD derives its strength from women voters who always stood by the party for the last 20 years. To snatch the seat from BJP (powered by sympathy wave), BJD relies on women voters and Elina Dash is on a mission to achieve that goal. She is also trying her best to woo the youth voters of Balasore.

Rare Pics of Biju Babu as a Cricketer