The hashtag trended at No. 2 and No. 3 nationally 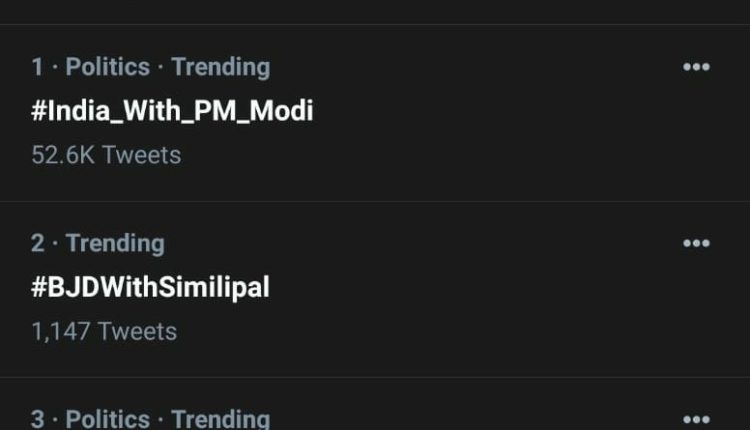 Thanks to the efforts of Forest Officials, Fire Service Personnel, ODRAF Team as well as the BJD Youth and Women Volunteers aided by the ‘Rain God’, the Similipal fire seems to be under control now. However, the ruling party has managed to create a Twitter storm today after a long gap.

Critics may be upset, but the BJD under the directive of its Organisational Secretary Pranab Prakash Das and with the support from youth leader Subrat Chhatoi, has outwitted them fair and square.

If they continuously tried to put the Govt and party on back foot with their hashtag campaigns, BJD had an answer with #BJDWithSimilipal which was trending at No. 2 and No. 3 for two hours today. The Twitter campaign may be an online strategy, but the party posted real photos and videos that proved their presence at the ground unlike many others who never visited Similipal or don’t wish to do so in future.

The battle between these two groups of Twitter Warriors continues. There is nothing wrong. But, whoever wins, Similipal should heave a sigh of relief!

Odisha Govt alongwith its Task Force is working tirelessly 24×7 to control and eliminate the fire in Simlipal. The BJD volunteers on ground and working in tandem to douse the fire. Thousands of Forest Officials, ODRAF Personnel, Fire Services are at work. #BJDWithSimilipal

I appreciate the efforts of all BJD Volunteers who have been working relentlessly to save Similipal – a symbol of pride for Odisha.

I also appeal everyone cutting across the party lines, to join the efforts. Let's fight this menace together & show our unity.#BJDWithSimilipal pic.twitter.com/s7l9YedTAa

HCM Shri Naveen Patnaik has directed all @bjd_odisha workers to volunteer for rescue operations at Similipal Forest. The forest fire in Similipal is very unfortunate incident and Govt. Of Odisha is taking necessary measures to tackle the fire.#BJDwithSIMILIPAL pic.twitter.com/z4UzaYrt8L

#Similipal is the Pride of Odisha. Gratitude to all Forest Officials, Fire Services Personnel and ODRAF Team who are working 24×7 to control the forest fire.

Mayurbhanj @BYJD_Odisha and @bcjd_team team went inside the SIMLIPAL range to create awareness among the people to refrain from burning the forest any further and how important it is to preserve the precious SIMLIPAL forest. #BJDWithSimilipal pic.twitter.com/10Dg8Jc4Jh

It's our collective responsibility to #SaveSimilipal .

Forest Officials, ODRAF, Fire Services personnel are at work to douse the fire. BJD Youth Workers are there too. We need your support.

Please contact us with the details of fire spots. We will reach there. #BJDWithSimilipal pic.twitter.com/KYJFVdpMHU

When it comes to nature, there is no Politics. We need United efforts to #SaveSimilipal . And, our BJD Women, Youth and Students have joined the efforts. Let's encourage the officials and work in tandem with them to douse the fire. #BJDWithSimilipal pic.twitter.com/85nii0E8wO