Baijayant ‘Jay’ Panda back in Kendrapada

Baijayant 'Jay' Panda termed the mega drinking water project at Bharigada of Rajkanika "anti-people" and wondered why it happened without any public hearing. 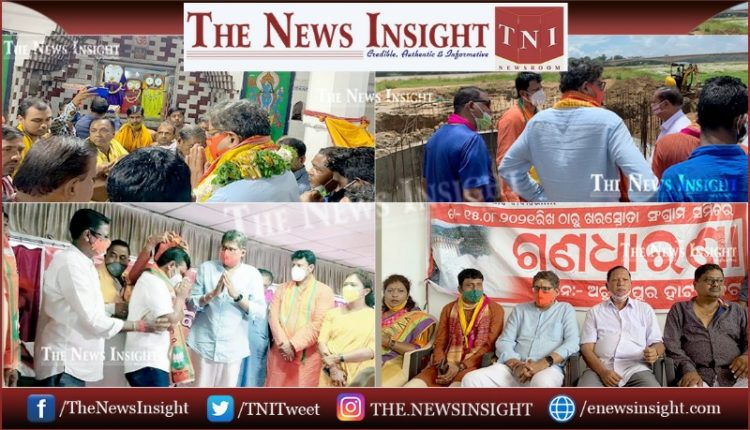 Insight Bureau:   It seems BJP’s National Vice President Baijayant ‘Jay’ Panda has shifted his focus back to Odisha. In the last few days, he met various top leaders of the party and also visited his Constituency Kendrapada. He stood by the protesters of Kharasrota Mega Drinking Water project.

Jay Panda assured the people in Rajkanika of full support as they continue their protests against the project that would divert the water to Bhadrak. He termed the mega drinking water project at Bharigada of Rajkanika “anti-people” and wondered why it happened without any public hearing. He went a step further to call it a “crime”.

Baijayant Panda was seen with the members of Kharasrota Sangram Samiti, lending them full support in their fight against the Government. He minced now words to slam the arrest of the protesters and met their family members.

While the Kendrapada District Administration has already started execution of the Kharasrota mega drinking water project with heavy deployment of police forces, the protesters have been on dharna to stop it.

Jay Panda also famous Baladevju Temple in Kendrapada and attended a joining program of the BJP. Some media reports had earlier claimed that Baijayant held meetings with Aparajita Sarangi, Bijoy Mohapatra and a few other leaders. However, there is no confirmation from either side.

Baijayant Panda is currently in charge of Assam and Delhi and it was expected that he would be sent to Rajya Sabha from Assam. But, it seems he is still interested in fighting the upcoming Lok Sabha polls in Kendrapada, the constituency he represented in 2009 and 2014.