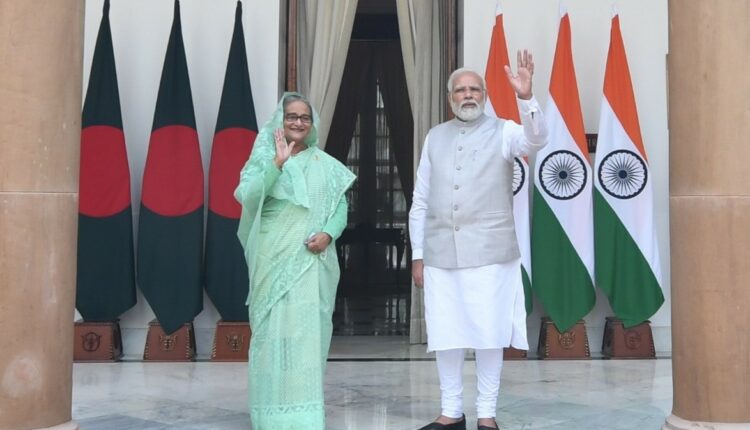 TNI Bureau: The recent visit of Bangladesh Prime Minister Sheikh Hasina to India and her talks with Prime Minister Narendra Modi and other leaders was another opportunity for the two neighbors to revisit their traditionally close ties and set new signs of strengthening them. The joint statement released at the end of Sheikh Hasina’s visit identified several critical areas of cooperation.

In recent years, India has supported infrastructure projects in Bangladesh, particularly in the energy sector, and the two leaders stressed the need for swift implementation. The Modi-Hasina talks also underscored the importance of implementing bilateral and sub-regional rail link projects, as well as river projects that would ensure better economic integration between the two countries. But perhaps the most important decision by the two leaders was to deepen trade and economic cooperation through the conclusion of a Comprehensive Economic Partnership Agreement (CEPA), negotiations for which would begin before the end of 2022.

There are several reasons why India needs to ensure that CEPA is completed swiftly. First, as a least developed country (LDC), Bangladesh currently benefits from India’s Duty Free Tariff Preference (DFTP) program, which was introduced in 2008. Following the decision adopted at the Sixth Ministerial Conference of the World Trade Organization that “Members from developed countries and Members from developing countries who declare themselves able to do so” would “provide permanent duty-free and quota-free market access for all products from all LDCs until 2008”. , India became the first developing country to extend this facility to the least developed countries. Currently, the DFTP program extends duty-free access to 98.2% of all Indian tariff lines (products).

All of this could change for Bangladesh in November 2026 as it would complete its degree at an LDC. This means that Bangladesh will no longer be a beneficiary of the DFTP program in just over four years. Therefore, India must act without delay to seal a bilateral CEPA through which not only can the benefits currently enjoyed by Bangladesh be continued, but India could also augment the benefits through market access in the services sector.

A second and important reason why India must act immediately is Bangladesh’s ambition to start negotiations with members of the Regional Comprehensive Economic Partnership (RCEP). At an inter-ministerial meeting held in July 2022, it was agreed that “the country will join the RCEP…if an opportunity arises after the negotiations”. Bangladesh clearly wants to partner with RCEP member states to expand its presence in East Asia, which it has failed to do in India.