These Weapons used by Chinese Army in Galwan Valley Clash? 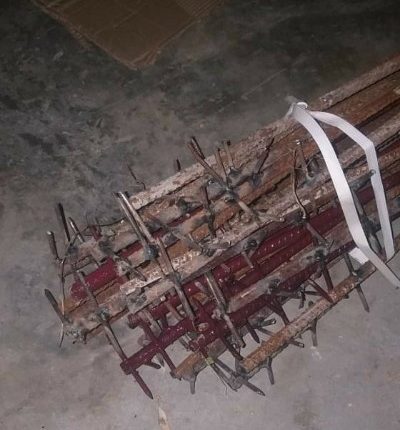 TNI Bureau: The People’s Liberation Army (PLA) of China used nail-studded rods and batons to launch an assault on the Indian soldiers in Galwan Valley, which proved beyond that the attack was planned and pre-meditated.

The Indian Jawans did not use firearms as per the agreement reached between both countries in the past, but the Chinese side took advantage of it and used non-conventional weapons. No bullets were fired from either side during the clash.

A viral photo tweeted by Senior Defence Writer Ajay Shukla, nailed the Chinese lies. “The nail-studded rods — captured by Indian soldiers from the Galwan Valley encounter site”, he tweeted with the photo.

The image also confirmed that the Chinese never intended to respect the disengagement agreement and wanted to escalate the situation further. The unprepared Indian Army Personnel were outnumbered by the armed Chinese.

While many media houses used this image, some others quoting the Army sources, say these images may be representational and not real. However, no official confirmation received either accepting or rejecting the image.

Although 20 Indian soldiers lost their lives, they fought valiantly till the end in adverse conditions, inflicting casualties on the other side too, as per the reports.

The nail-studded rods — captured by Indian soldiers from the Galwan Valley encounter site — with which Chinese soldiers attacked an Indian Army patrol and killed 20 Indian soldiers.

Such barbarism must be condemned. This is thuggery, not soldiering pic.twitter.com/nFcNpyPHCQ