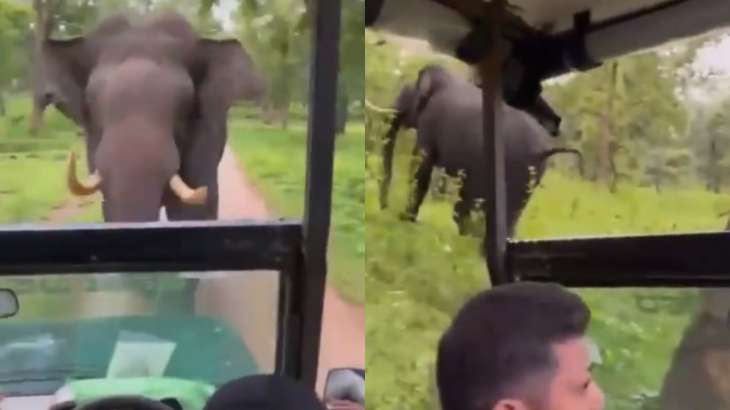 TNI Bureau: There is still a lack of planning for sustainable living, which contributes to man-animal conflict on a regular basis. Wild animals attacking humans is not uncommon and has occurred frequently in the past.

Now, a video from Kabini National Park in Mysore is making the rounds on the internet, showing an elephant attempting to attack a safari jeep.

The viral video begins with an elephant chasing a safari jeep at high speed while the jeep driver reverses the vehicle in the vehicle path laid out inside the national park. Despite being chased by a fully grown, furious male elephant at a brisk pace and within inches of him, the driver remains calm.

The footage shows the elephant colliding with the car, but the driver continues to drive backwards. The elephant then loses interest as the vehicle becomes stuck on a slant in the video. The chase is then abandoned by the giant creature, who moves into the forest.

Supriya Sahu, an IAS officer, uploaded the video, which quickly went viral. Netizens flocked to the comment section to express their feelings about the incident.

According to one user, “What is admirable about this? You supply the animal, try to follow it, and deny its peaceful space in its own territory, and you expect it to attack now? What would you think if someone sat outside your window looking for you? “. Another user commented, “Encroaching on the territory of the animals will always result in potentially fatal situations. Why can’t they be left alone because they don’t encroach on human territory but we always do? The animals are always friendly with the tribal population, who understand their boundaries “.