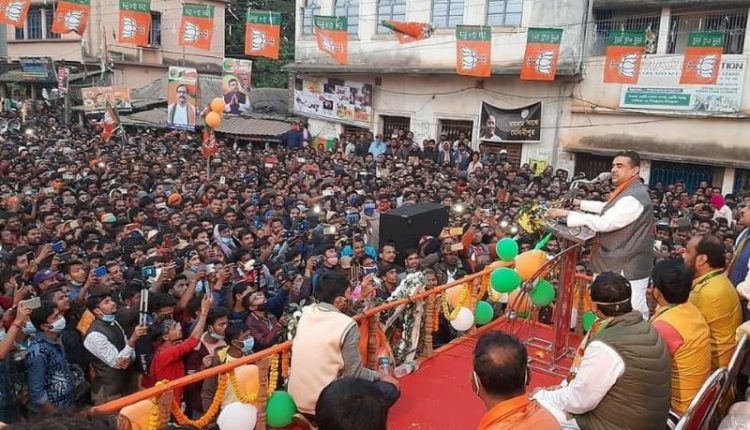 TNI Bureau:  With the recent induction of the former TMC leader Suvendu Adhikari to the BJP, the ‘Lotus’ has established its short roots in Bengal. The youngest political member in the Adhikari family, Soumendu Adhikari, has also followed the footsteps of his brother. Along with two Adhikari(s), many TMC MLAs and MPs joined the BJP.

The sudden exit of former TMC observer Suvendu Adhikari is a big blow to TMC. Additionally, the TMC may also lose its grip from the districts of Bankura, Purulia, Paschim Medinipur and Purba Medinipur, Malda and Murshidabad areas.

His distinct rural Bangla accent and straightforward speeches may strongly entice the people of Bengal towards BJP.  As a former TMC observer of certain areas, he knows the tips and tricks to lure people towards BJP.

However, after exiting from TMC, he could have simply formed his party, but he chose BJP over ‘self-sufficiency.’ His association with BJP may help him to escape from the investigation of the Narcotic Drugs and Psychotropic Substances (NDPS) Act.

TMC has not backed out yet. Ahead of the Assembly election, TMC Supremo, Mamata Banerjee launched Duare Sarkar, Sawsthya Sathi Card and other state-level developmental works.

The roadshow has been grand in both cases, along with a slanging match between the two parties. Another grand roadshow will be witnessed on January 8, 2020. As per the recent development, Home Minister Amit Shah is expected to visit West Bengal in the last week of January to hold a public rally.

Amidst all political drama, rural people are getting free blankets and false promises hopefully to get ‘bhalo sarkar’ (better government) in the upcoming days. The exit of Suvendu Adhikari is a setback, but Mamata Banerjee is not ready to give up.

If BJP conquers Bengal, it will be a gateway to extreme corners of northeast India. In 2014, BJP chanted the slogan of ‘Sabka Sath Sabka Vikas.’ However, the mantra has now evolved with twists and turns to endure Nationalism, rather than Patriotism.

The Assembly election in 2021 will decide the face of West Bengal. Whoever wins will justify that either Bengalis are loyal or Bengal seeks to change.