The upcoming horror comedy will premiere on Disney+ Hotstar on September 17. 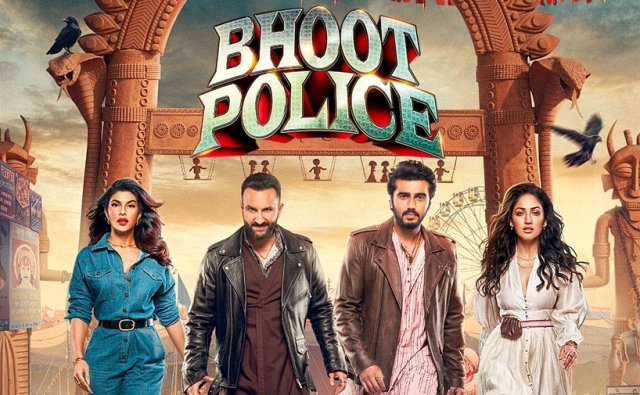 The much-awaited trailer of ‘Bhoot Police’ has been released today, taking the Social Media by storm. The upcoming horror comedy will premiere on Disney+ Hotstar on September 17. In the film, Saif and Arjun portray phony ghostbusters, while Jacqueline and Yami play their love interests.

Vibhooti, played by Saif Ali Khan, appears to be an agnostic who is just in the ghostbusting business for the money, but Arjun Kapoor’s persona takes his job seriously and claims that he has been given the responsibility. Arjun’s Chiraunji has a book he refers to as “baba ki kitab,” which he checks on a frequent basis.

The trailer looks like a cross between the popular Hollywood film franchise Ghostbusters and the popular cartoon Scooby-Doo, replete with a van-driving gang. Yami Gautam and Jacqueline Fernandez’s characters, Maya and Kanika are also featured in the teaser.

Ramesh Taurani and Akshai Puri produced the film with Pawan Kripalani as the director. Actor Jaaved Jaaferi also appears in the film. Bhoot Police began filming in Himachal Pradesh in November 2020. The film was originally set to hit theatres on September 10, but owing to the ongoing pandemic, it will now be released online.