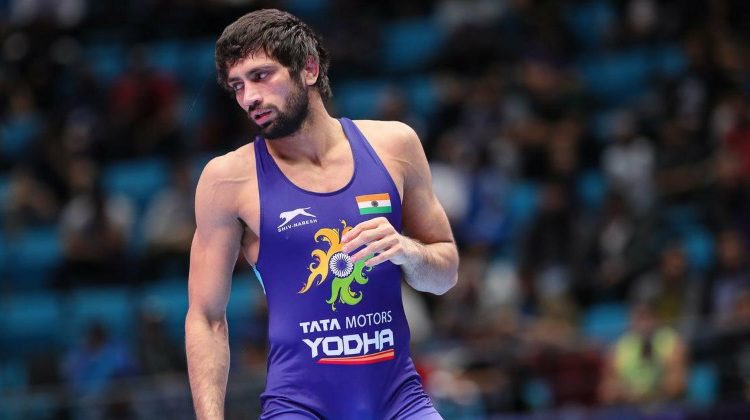 Ravi Kumar Dahiya becomes the second Indian wrestler to win silver in the Olympic Games, losing 4-7 in the 57 kg Wrestling Finals to Russia’s Zavur Uguev, a two-time World Champion. After Sushil Kumar in 2012, he is the second Indian to win a Olympic Silver in Wrestling.

The opening point was won by Uguev, who forced Ravi off the mat. Ravi was pushed out once again, giving the Russian a 2-0 lead. To equalise, Ravi spun around and shoved the Russian down on his stomach, but he couldn’t earn any more points. As soon as the action resumes, the Russian follows up with a 4-2 over Ravi.

Ravi was grabbed from behind by the Russian, and despite Ravi’s best efforts, he was pushed out. Uguev has a 5-2 advantage. Ravi attempted to tackle Uguev, but the Russian turned the situation around and put Ravi to the ground flat on his stomach. With one and a half minutes left, Uguev lead 7-2. As Uguev attempts to push Ravi out again, the Indian spins around and puts the Russian flat, giving Ravi two points and a 4-7 deficit.

Dahiya was born in the hamlet of Nahri in the Sonipat district of Haryana in 1997. Satpal Singh has been training Dahiya at the Chhatrasal Stadium in North Delhi since he was ten years old. His father Rakesh Dahiya, a modest farmer, would go from their village to the stadium every day to provide fresh milk and fruits, which were an important component of his wrestling diet for more than  decade.

At the 2015 Junior World Wrestling Championships in Salvador de Bahia, Dahiya earned silver in the 55 kg freestyle event. In 2017, he had an injury that kept him out of the game for almost a year. In his return year, he clinched the silver medal in the 57 kg category at the 2018 World U23 Wrestling Championships in Bucharest, which was India’s lone medal at the competition.

Dahiya was undefeated in the 2019 Pro Wrestling League while representing the Haryana Hammers, the league’s champions. He was ranked fifth after losing the bronze medal match at the 2019 Asian Wrestling Championships in Xi’an.

Dahiya made his World Championships debut in 2019, defeating Arsen Harutyunyan, the European champion, in the round of 16, and Yuki Takahashi, the 2017 world champion, in the quarterfinal, to win one of the six open quota spots for the 2020 Summer Olympics. After losing in the semifinal round to reigning champion and eventual gold winner Zaur Uguev, he settled for bronze.

Dahiya advanced to the Finals at Tokyo Olympics after mounting a comeback, cutting the points lead to 7-9 and then pinning the Kazakh wrestler down in the last minutes to win the fight ‘by fall.’ On the internet, photos of his Kazakh opponent attacking him and attempting to win the bout by unfair methods surfaced last night.