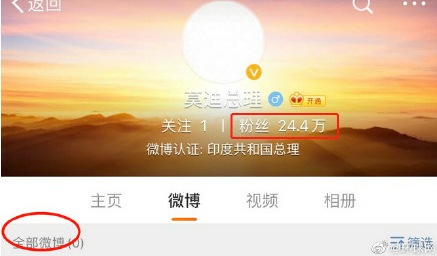 TNI Bureau: Weibo, China’s alternative to Twitter, which is one of the 59 Chinese Apps banned by the Indian Government, has confirmed that it has closed PM Narendra Modi’s verified account upon a request received from the Indian Embassy in China.

PM Modi, one of the most popular persons on Social Media, has over 244,000 followers on Weibo. He used to post messages using standard Chinese language.

After the Government of India banned 59 Chinese Apps over “national security” concerns, PM Modi had opted out of the microblogging site Weibo, leading by example. His profile photo and all other information were removed from the site today.

PM Modi’s Weibo account was set up in 2015 before his much-publicized first visit to China as the Prime Minister.