Lohri - The harvest festival of Punjab. 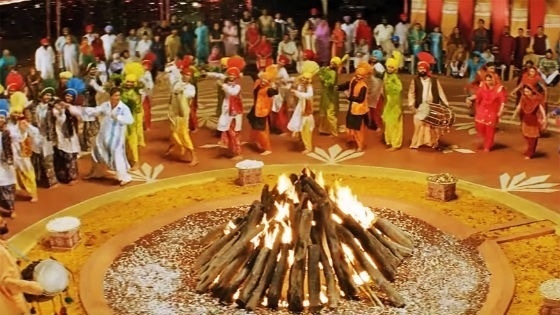 Lohri is a very popular and auspicious folk festival among the people of Punjab and Haryana. The word “Lohri” actually comes from the word “Tilohri”(til-black sesame). There many legends related to the significant festival of Lohri.

In mid-winter people especially celebrate this festival by dancing and singing around the “lohri” which is basically a bonfire. Lohri marks the welcoming of the longer days after the winter solstice.

According to an  ancient folklore, in the ancient times people used to celebrate Lohri at the end of the traditional month.  The sun proceeded towards the northward side and the days used to get long.

Lohri usually falls on the 13th or 14th day of January. The Punjabis burns the Lohri to pray to  God and asks to bring them warmth and blessings for the good production of crops throughout the year.

They believe that when they light the lohri and worship the God, the flames carries their message to him. While praying they offer prasad like til (black sesame seeds), peanuts, gur(jaggery),chikki to the lohri as a gratitude towars the nature. They perform Bhangra and Gidda on the beats of the dhol.

This is a festival of harvest. Lohri is incomplete without the winter food, like til ki laddu, gur ki roti, sarson da saag.

There are a number of legendary folklore about the festival. The most important Lohri legend states that people worship the Sun God or Surya Dev and thank him for providing warmth and heat on earth.

By lighting the lohri, people pray for the well-being and good health of their families and the loved ones, for their children’s marriage, for being wealthy and healthy throughout the year to the God Agni. They sing all the Indian Lohri Folk songs and thanks Agni and Surya Dev. Through this festival people show their faith and optimism towards the God.

Netaji Bus Terminal to come up in Cuttack