The issue surrounding the IAS officer's abrupt recall exemplifies the tense relationship between the Centre and the West Bengal government. 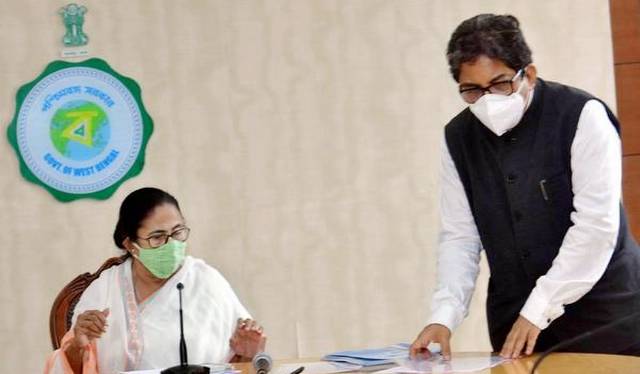 The Department of Personnel and Training (DoPT) has summoned Bandyopadhyay to appear before it on Tuesday, after his term as West Bengal’s chief secretary expired on 31st May,2021. The issue surrounding the IAS officer’s abrupt recall exemplifies the tense relationship between the Centre and the West Bengal government.

While the Centre has warned Bandyopadhyay with disciplinary action for failing to report to the DOPT, West Bengal Chief Minister Mamata Banerjee has named the IAS official as her new chief advisor to deter him from leaving the state.

Alapan was a West Bengal-based IAS officer from the 1987 batch. He formerly served as a district magistrate in the districts of Howrah, North and South 24 Parganas. He had also worked as a municipal commissioner in Kolkata. As senior secretary, he oversaw numerous departments, including transportation, Micro, Small and Medium Enterprises (MSME), trade and industry, information and culture, and home as principal secretary. In 2015, the IAS officer also served as the state’s interim election commissioner. In 2017, he published the novel ‘Amlar Mon.’

Bandyopadhyay was born in Kolkata, West Bengal, in 1961. He is married to Sonali Chakravarti Banerjee, the present Vice Chancellor of the University of Calcutta and an academician. When he and his wife were linked to the first COVID-19 case in West Bengal, they were placed in quarantine.

The state administration had requested a three-month extension of Bandyopadhyay’s tenure from the Centre on May 24, noting his critical involvement in the state’s resilience to Cyclone Yaas and the coronavirus pandemic. The Centre consented to the demand of the West Bengal administration.

On May 28, the Centre ordered Bandyopadhyay to report before the DOPT in Delhi on May 31, a date that has now been pushed forth to June 1. CM Mamata Banerjee wrote to the Centre, calling the Centre’s move “unconstitutional” and “illegal,” and adding that the state government “cannot release and is not releasing its chief secretary at this critical hour.”

She also announced Bandyopadhyay’s appointment as a government advisor for three years in order to prevent him from departing for Delhi.

What may have prompted Bandyopadhyay’s recall by the Centre?

It is believed that Bandopadhyay became embroiled in the squabble after he and Chief Minister Mamata Banerjee failed to attend a Cyclone Yaas review meeting with Prime Minister Narendra Modi, as BJP MLA Suvendu Adhikari, who defeated her in the recent assembly elections in Nandigram, was also present.

On May 28, CM Banerjee and Bandopadhyay skipped a scheduled meeting at Kalaikunda, Paschim Medinipur district. Later that day, the two met with the Prime Minister alone and submitted proposals for Rs 20,000 crore in relief funds to help the state recover from the cyclone’s ravages.