KIMS Doctors give a New Life to Patient; remove Bamboo Pole from Body 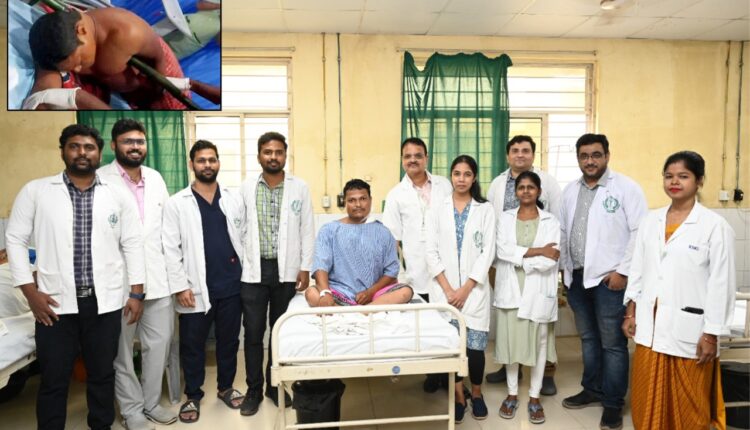 Share
TNI Bureau: A team of Doctors at the Kalinga Institute of Medical Sciences (KIMS) gave a new lease of life to a
40-year-old youth by removing a Bamboo Pole from his body.
The patient, Tapan Parida, resident of Talajanga under Chandanpur block in Puri district was rushed to the hospital around midnight on October 28. A 5-foot-long bamboo pole went through his chest and emerged from the back side above his neck.
An expert six-member surgical team led by Dr Pran Singh Pujari of the Surgery Department including anesthesia expert Dr Sanjay Kumar Behera, operated on him for nearly four hours using state-of-art procedures and complex methods in modern surgery to remove the object.
Family members said the incident with Tapan happened on October 28 at around 9.30 pm.  He was inspecting the water level near the siphon along his paddy field. He suddenly fell on a bamboo underneath, about 15 feet down his field. The bamboo piece pierced through his chest. The locals brought him to the KIMS immediately. Though the surgery was complicated, the Doctors took it up as a challenge. The patient is out of danger and is recovering well.
Related Posts

He has, however, been advised 21 days rest. Dr Pujari said the entire process for Tapan to get cured would take around three to six months as he was in a critical condition. Tapan, who got a new lease on life due to the efforts of the team of KIMS experts, has expressed his gratitude to the doctors and the hospital authorities.
Dr. Achyuta Samanta, Founder, KIIT, KISS & KIMS thanked Dr Pujari and the team involved in the operation, while he also wished the patient’s speedy recovery.
While the name and fame of KIMS have created a niche among the people of Odisha and neighboring West Bengal, Chhattisgarh, Jharkhand, and Andhra Pradesh, it is constantly setting up new benchmarks in successful procedures and quality medical services with affordable cost a quality patient care.
Bamboo PoleHealthKalinga Institute of Medical SciencesKIMS DoctorsOdisha
Share FacebookTwitterWhatsApp