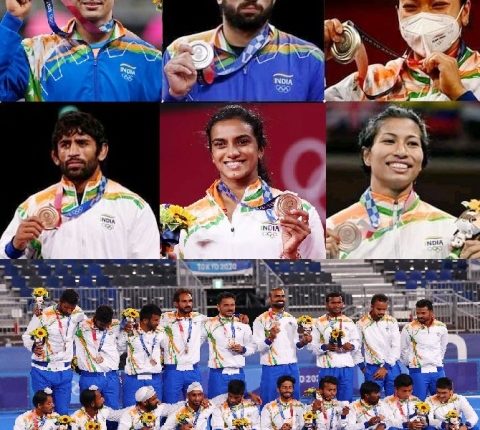 TNI Bureau:  As India sent its largest-ever delegation to the postponed Tokyo Olympics, there were high hopes and expectations. India’s medal total in the Tokyo Olympics increased to seven this time, surpassing the country’s previous record of six at the 2012 London Olympics. India had a strong performance at the Tokyo Olympics, winning one gold, two silver, and four bronze medals. 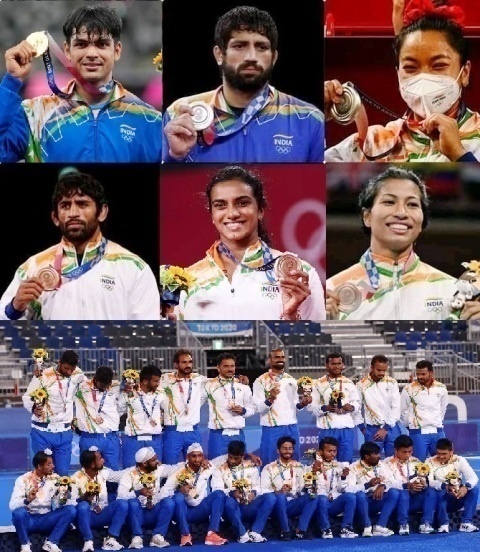 Neeraj Chopra, a star javelin thrower, became only the second Indian to win an individual gold medal at the Olympics on Saturday, outperforming the competition by a wide margin to claim India’s first track-and-field medal. The 23-year-old farmer’s son from Khandra village near Panipat in Haryana stunned the sports world by throwing 87.58 metres in the finals, ending India’s 100-year wait for an Olympic track and field gold. He qualified for the finals with a throw of 86.65 metres finishing at the top of the list in the qualifiers.

Mirabai Chanu won a silver medal in the 49kg division, ending India’s 21-year drought for an Olympic weightlifting medal, and opened the country’s Olympic medal account this year. The 26-year-old lifted a total of 202 kilogrammes (87 kilogrammes + 115 kilogrammes) to beat Karnam Malleswari’s bronze medal from the 2000 Sydney Olympics. She was able to banish the demons of the 2016 Olympics, when she had failed to register a single valid clean and jerk lift.

Ravi Kumar, the second Indian wrestler to win an Olympic medal, lost his 57kg final against Russian two-time reigning world champion Zavur Uguev on Thursday. Ravi Kumar became only the second Indian wrestler to earn an Olympic silver, after  Sushil Kumar. Ravi is the fourth Indian male wrestler to earn an Olympic medal, and the fifth overall. His victory was India’s fourth in a row in the Olympics in the sport of wrestling. In a dramatic 57kg semifinal match at the Tokyo Olympics, Dahiya beat Nurislam Sanayev of Kazakhstan. It was a huge comeback victory for the Indian wrestler, who was down 2-9 at one point before winning five points in a row to narrow the deficit.

PV Sindhu made history when she beat China’s He Bing Jiao and became the first Indian woman to win two Olympic medals. In the bronze medal match, Sindhu defeated He Bing Jiao 21-13 and 21-15. Throughout the competition, Sindhu was ruthless and didn’t allow her opponent a chance. Sindhu had lost a heartbreaking semi-final match to world number one Tai Tzu Ying on Saturday.

In the women’s welterweight class, Lovlina Borgohain ended with a bronze after losing in the quarterfinals against defending World Champion and top seed Busenaz Surmeneli. After Vijender Singh (men’s middleweight bronze, Beijing 2008) and MC Mary Kom (women’s flyweight bronze, London 2012), Lovlina becomes the third Indian boxer to earn an Olympic medal. Lovlina, the current World No. 3, had earlier qualified for the semi-finals by defeating World No. 2 Chen Nien-Chin of Chinese Taipei 4-1 in the quarterfinals.

Bajrang Punia won the bronze medal in the men’s 65kg Freestyle event, defeating Kazakhstan’s Daulet Niyazbekov. He may have lost out on gold and silver, but he guaranteed his place on the podium in Tokyo, where wore a bronze medal around his neck. The 27-year-old wrestler won bronze in the men’s 65kg freestyle division after a dominating 8-0 victory in a one-sided match.

India won the bronze medal in hockey for the first time in 49 years and their first podium in 41 years, defeating Germany 5-4 in the third-fourth place play-off match. India flipped the game on its head by scoring two crucial goals in the third quarter, putting them in a commanding position. They defended their hearts out in the fourth quarter, putting their bodies on the line at times, and finally hanging on to a tight one-goal lead after the Germans cut the score to 5-4.