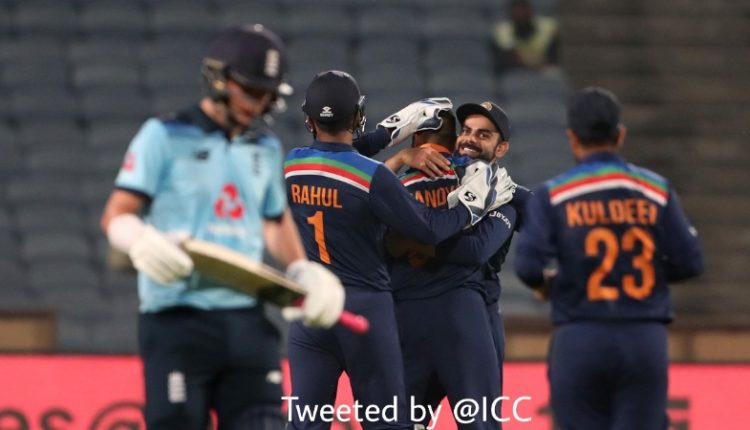 TNI Bureau: Following the win in Test and T20I series, Team India began the ODI campaign against England on a winning note, as they beat the Poms by 66 runs in the first ODI in Pune.

In reply, England started it well with a 135-run opening partnership between Jason Ray and Jonny Bairstow. However, once the partnership was broken, England was on a back foot.

England bowled out for 251 in 42.1 overs and lost the match by 66 runs. Roy scored 46. Bairstow was the top scorer with 94. Moeen Ali (30) and Morgan (22) were the other contributors. For India, pacer Prasidh Krishna had a dream debut, as he took 4 wickets. Shardul Thakur took 3 wickets. Bhuvneshwar Kumar claimed two wickets.

Krishna became the first Indian to claim 4 wickets in ODIs on debut. Another debutant Krunal Pandya hit the fastest 50 by any debutant in ODI when he completed his 50 off 26 balls.

Shikhar Dhawan was declared ‘Player of the Match’.