A 2km Freedom Walk was organized by the Regional Outreach Bureau, Hyderabad as a part of the Iconic Week Celebrations. 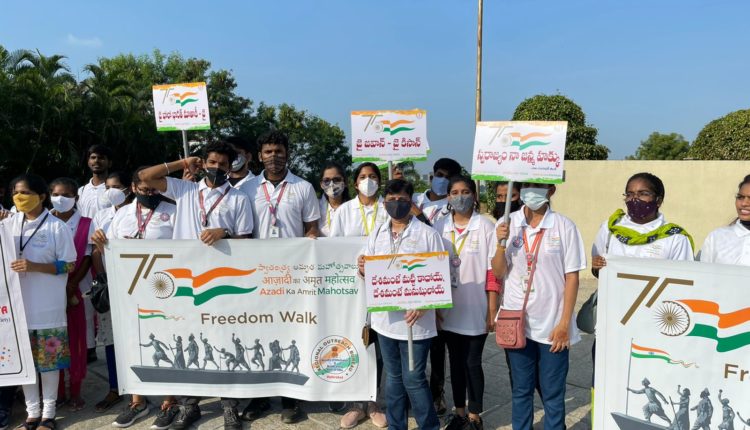 Insight Bureau:  A 2km Freedom Walk was organized by the Regional Outreach Bureau, Hyderabad as a part of the Iconic Week Celebrations.

The march was kicked off at Jalvihar early in the morning by Press Information Bureau DG Shri S.Venkateshwer and ROB Director Smt.Shruthi Patil.  The walk was attended by college students, citizens, Osmania University volunteers, Nyks volunteers as well as NSS volunteers from renowned institutions such as St. Joseph’s Degree and PG College.

The walk was a great success, with students, volunteers, and residents chanting  “Vande Mataram” and “Bharath Mata ki Jai” throughout the march and spreading as much patriotism as possible.

Anurag Thakur, the Union Minister for Information and Broadcasting, will begin a series of activities to commemorate the ‘Azadi ka Amrit Mahotsav’ on August 23. The festivities will continue till August 29. According to a statement released by the ministry, the events would attempt to ” ‘ showcase the convergence of the values and glories of the freedom struggle of the past with the aspirations and dreams of a young, new and iconic India.”

During Iconic Week, the ministry will use enormous outreach efforts to highlight the path of modern India and commemorate the contributions of freedom fighters, especially the “Unsung Heroes of the Freedom Struggle,” according to the ministry.

Traditional methods such as cultural programmes, nukkad natak, and television programmes, as well as modern digital and social media, will be used to promote the celebrations.

India may enter Endemic stage of Covid; Know What does it Mean