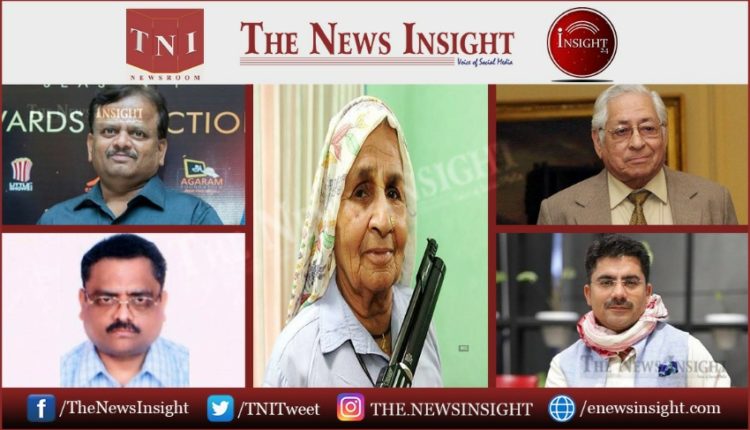 Known for his witty and polished arguments, the notable Indian jurist and formal Attorney General, Soli Sorabjee, passed away due to Covid-19 complications. He had paved a remarkable life in law, human rights, press freedom and humanity. A Parsi from the Bombay Law College dominated the Supreme Court, following the footsteps of his mentor Nani Palkhivala. His assistance in various cases protected the individual rights and civil liberties of the citizens. He was 91 and was being treated at a private hospital in Delhi.

The remarkable TV Journalist of Aaj Tak, Rohit Sardana, died of cardiac arrest after being tested positive for COVID 19. He was 42. Sardana was an executive editor and TV news anchor in Aaj Tak, India Today Group. His demise has shocked the Media fraternity.

Indian octogenarian sharpshooter Chnadro Tomar died at the age of 89 while battling COVID. She was admitted to a hospital in Meerut on April 26. Popularly known as ‘Shooter Dadi’, She went on to win several national competitions, inspiring an utmost award-winning movie, ‘Saand ki Aank.’ Several politicians and celebrities from the film fraternity offered their condolences on Twitter.

Filmmaker and cinematographer KV Anand died of cardiac arrest after being tested positive for COVID-19. He started his career as a photojournalist and assisted cinematographer PC Sreeram in several films namely, Gopura Vasalile, Meera and so forth. In 1994, he received a national film award for the best cinematographer in a Malayalam movie called Thenmavin Kombath. He was 54.