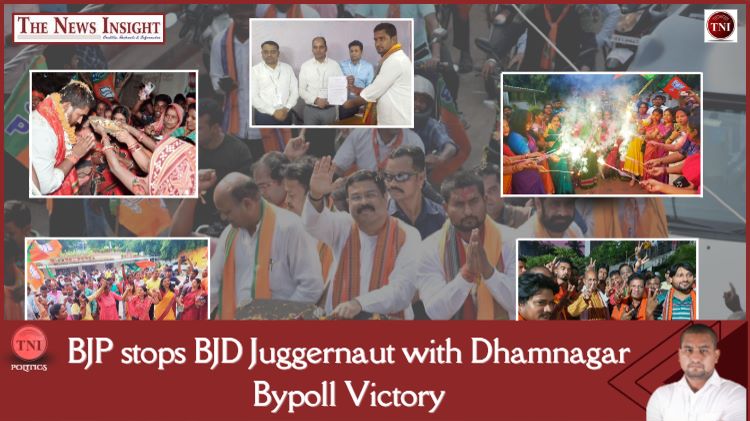 TNI Bureau: The miracle has happened. Despite using all their resources and electioneering machienery, deploying the students and youths and playing the ‘Mission Shakti’ women card, the ruling Biju Janata Dal (BJD) failed to maintain its winning streak in Dhamnagar.

The BJP has not only retained its seat and forgot the agony of Balasore Sadar, but also sent a clear message to people of Odisha as well as the Media – “BJD is not invincible and it can be defeated”.

There are several factors behind Surybanshi Suraj’s rise and the comprehensive victory by a margin of 9881 votes, which triggered a huge political debate across Odisha.

➡️ Suryabanshi Suraj, A Fit Candidate: An engineer by profession and part of BJP’s Social Media Team, 27-year-old Suraj did not join politics suddenly. He was preparing for this entry by helping his father late Bishnu Sethi and got connected to the ground. He was the obvious choice for the BJP when Bishnu Sethi passed away.

People of Dhamnagar, who have been sympathetic towards Suraj, listened to his call for support and responded positively. The ‘Mission Shakti’ card played by the BJD failed to hit the emotional chord with women voters  going with Suraj. Suraj had started campaigning well in advance after getting the unofficial nod. He was the first to hit the ground and continued the momentum till the end.

➡️ Raju Das, The Rebel: A former MLA, Rajendra Das alias Raju Das lost the 2019 elections due to the betryal by his own party leaders. Despite the loss, he was active in Dhamnagar politics and led the panchayat polls. He not only helped the party win big in panchayat polls, but also emerged as a strong leader to reckon with.

Surprisingly, BJD dumped him in favour of a political novice Abanti Das, whose victory as Tihidi Block Chairperson, was ensured by Raju Das himself. Despite all efforts, BJD failed to “manage” Raju Das who not only played the spoilsport, but also triggered huge resentment against the “poll managers” among the BJD cadres and leaders in Dhamnagar.

BJD tried its best to prevent Raju Das from getting more than 5000 votes, but he polled 8153 votes without any support, which proved beyond doubt that it was an absolutely wrong decision of the party to ignore him.

➡️ Mission Shakti: BJP was determined to break the ‘Mission Shakti’ Women SHG hurdle this time. And, it happened when they fought among each other on the issue of funds and importance. Other Women SHGs protested when those linked to BJD got absolute power. That triggered a divide.

➡️ Resentment among Leaders/Workers: While Naveen Patnaik remains an undisputed leader of BJD, same cannot be said for anyone including Strategist Pranab Prakash Das and his team that includes Pranab Balabantray, Priti Ranjan Gharai, Byomkesh Rai and others. Senior leaders of the party as well as the Karyakartas are not happy with their way of functioning and approach. They feel ignored, threatened, snubbed and sidelined.

Surprisingly, many within the BJD wanted the party lose in Dhamnagar, saying arrogance and highhandedness of some leaders should end. It’s high time the BJD strategic team acknowledges their mistakes and work hard to take everyone along.

There is little doubt that Bobby Das is a great organiser and is credited with BJD’s growth across Odisha. Sources said, he is highly upset with some of the youth leaders who let him down and will go for a massive overhaul soon. Dhamnagar was a wake up call for him and he is a person who learns from mistakes and takes corrective steps.

➡️ Too much dependency on Electoral Machinery: BJD relied heavily on the Electoral Machinery they have built over the years. Apathy towards political leaders and giving more importance to the officials, proved it costly for the party. There is a strong undercurrent against this and course correction is must to undo the damage, which is not seen yet, but may be reflected in 2024 polls.

➡️ Dhamnagar & Swabhimaan: People of Dhamnagar are known for their tough stance, strong approach and quest for change. They proved it again by defying the trend and negating all permutations and combinations. The Bhadrak vs Jajpur debate played a key role in widening the divide further. BJD’s Strategy Team had a tough time to deal with the unprecedented situation. They failed to send a right message, which went against the party candidate.

➡️ Movers and Shakers of the BJP: For the first time in many years, BJP fought the elections as an unit with a clear focus – to win. Sunil Bansal, Co-observer, Odisha BJP, did the groundwork to motivate the leaders and karyakartas. He made it clear that BJP is fighting to win, and nothing else.

Union Minister Dharmendra Pradhan raised the pitch by aggressively campaigning, making resources available and even mincing no words to target the BJD leaders, including the Chief Minister. It was a ‘make or break’ fight for Dharmendra and he proved his worth.

Manmohan Samal, former Odisha Minister, can be considered as ‘Man of the Match’. He not only prevented the possible poaching by the BJD after Bishnu Sethi’s demise, but also stood firm by Suryabanshi Suraj and did all the ground work and poll management. His experience as well as expertise helped the party to fight rampaging BJD.

➡️ Minorities Vote Bank: Although Bishnu Sethi managed to get sizeable votes of Muslim population in 2019, the anti-Muslim campaigns and rise of Hindutva ideology across India in the last 2 years, was matter of concern for the BJP. But, thanks to Manmohan Samal’s strategy and Raju Das, BJP managed to divide them and get the number it wanted.

➡️ The BJD Showstoppers: They failed to impress. Whether leaders, celebrities or selfie-lovers, they were rejected by the people of Dhamnagar, who gave a big thumbs down to their campaigning.

➡️ IT & Social Media: Yet again, the BJD Social Media Team failed to read the pulse of the common people and designed the themes and designs that hardly helped the party. In the absence of a proper, dedicated distribution network, it failed to deliver against a party like BJP, which has the expertise in building perceptions and narratives.

➡️ Final Word: Course correction is the need of the hour. The results wont have any impact on BJD Government. But, some bigger questions emerged. If it failed to manage one bypolls despite heavy deployment of resources, what will happen when it goes to polls in 2024. 147 seats will be at stake and they will face big challenges like rebels, anti-incumbency and strong under-current against the party.

The battle is now shifted to Padampur. And, both teams will fight it out again to prove their supremacy.

Lunar Eclipse on Nov 8; Do’s & Don’ts during last Chandra Grahan of the year