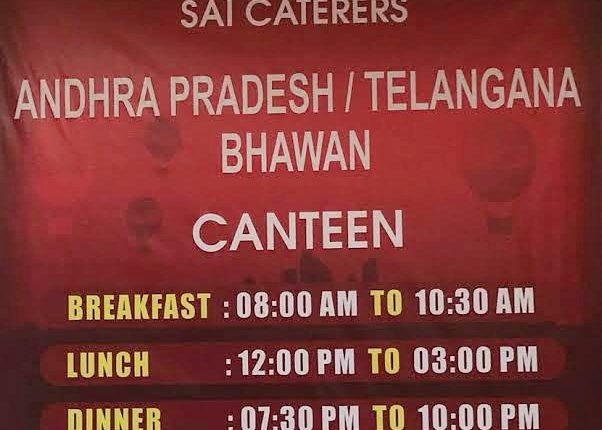 Andhra Pradesh/Telangana Bhavan  Canteen, which is situated in Delhi, serves all sort of South Indian foods in the busy streets of North India. They have been serving the people of Delhi for a long time now. This canteen has been a massive hit among the foodies of Central Delhi.

As the lockdown began, the place was also shut down and remained closed for almost 10 months. However, the place is reopening on 28th January, 2021. The canteen is situated at 1, Ashoka Nagar, New Delhi.

The canteen was renamed after three and a half years coinciding with the visit of the Chief Minister K Chandrasekhar Rao to New Delhi. Earlier it was known as Andhra Bhavan Canteen and now is known as Andhra Pradesh/Telangana Bhavan Canteen. The change of name did not harm the popularity or the regular visitors of this place. This place serves a full course meal a day during particular hours.

The Breakfast time is morning 8 AM to 10:30 AM, Lunchtime is 12 noon to 3 PM and the dinner timing is 7:30 PM to 10 PM. They serve traditional South Indian and Mughlai cuisine along with some refreshing beverages. The menu includes Idli, Vada, Dosa, puri, and a variety of curries and other breakfast items. They also serve mouth-watering South Indian Thalis, Hyderabadi Chicken biriyani and Telugu non-veg side dishes like chicken fry, mutton fry, fish fry, fish curry, prawn curry. They have a Sunday special as well. The pocket pinch of this canteen for two people is estimated to be around 400/- only.