That is what happened on Saturday at the Brabourne Stadium as the Sunrisers Hyderabad were set a target of 69 runs by the Royal Challengers Bangalore, which Kane Williamson’s side chased down in just 8 overs – 72 balls to spare – shooting up their net run rate and taking the second place on the points table. 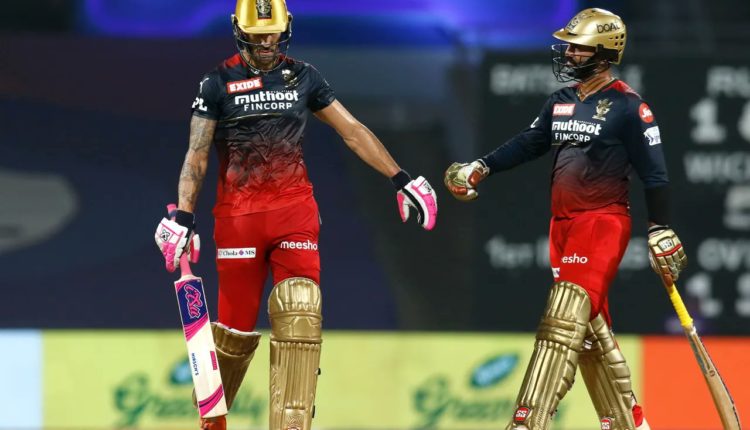 Insight Bureau: It rarely happens in T20 cricket that when a team batting second starts their innings, it’s merely a formality; that the outcome of the match is a foregone conclusion.

?That is what happened on Saturday at the Brabourne Stadium as the Sunrisers Hyderabad were set a target of 69 runs by the Royal Challengers Bangalore, which Kane Williamson’s side chased down in just 8 overs – 72 balls to spare – shooting up their net run rate and taking the second place on the points table.

And although RCB managed to hold on to their fourth position – courtesy of 5 wins now in 8 matches – their net run rate has taken a damaging dip that could haunt them later. Moreover, this shambolic batting malfunction will also dent their batters’ confidence, the top-order that already had been struggling for touch and collective form.

RCB were hurt in the powerplay when they lost their top four, including Virat Kohli bagging his second successive golden duck. Dinesh Karthik, who has been their best batsman this season, was their last hope of a respectable total. But, the man who had bailed them out on most of their wins so far, had an off day and was dismissed for a duck.

9 of the 11 batters couldn’t go into double digits. The highest score of their innings came from Suyash Prabhudessai – 15. The next best was 12, jointly held by Maxwell and EXTRAS.

Not only in the last match, RCB’s horrible batting performance has kept it in critics for years. Be it 2017’s match against KKR or 2019’s CSK, RCB has miserably lost to its rivals because of its weak batting skill.

?In 2017, chasing a target of 132, set by Knight Riders, RCB, boasting the likes of Virat Kohli, Chris Gayle and Ab De Villiers, were bundled out for just 49, losing the match by 82 runs. Nathan Coulter-Nile (3/21), Chris Woakes (3/6) and Colin De Grandhomme (3/4) destroyed the mighty batting line-up of RCB with their fiery spells.

?In the very first match of the 2019 season of the league, RCB were bundled out for 70 by CSK. Barring the lone saving grace, Parthiv Patel, who scored 29, everyone failed to register a double-digit score. Imran Tahir was the pick of the bowlers, scalping three wickets by conceding just nine runs of four overs.

?In the 14th match of the 2014 IPL the Challengers were bundled out for just 70 against Rajasthan Royals, with Captain Virat Kohli (21) being the top-scorer. The Royals won the contest by six-wickets.

?The RCB battling line was rocked by KKR in the 31st match of 2021 IPL, as they could only manage 92 runs on the board.

?In the 34th match of the 2017 IPL, RCB was rocked by Rising Pune Supergiant, the finalists of that particular edition. Chasing 158, Bangalore never looked in contention despite Virat Kohli’s valiant 55. Then RCB skipper Kohli proved to be pretty much one-man-army for his side, with no support coming from the other end. Finishing at 96/9, RCB lost the game by 61 runs.

VKareU to start operation in Odisha from 30th April