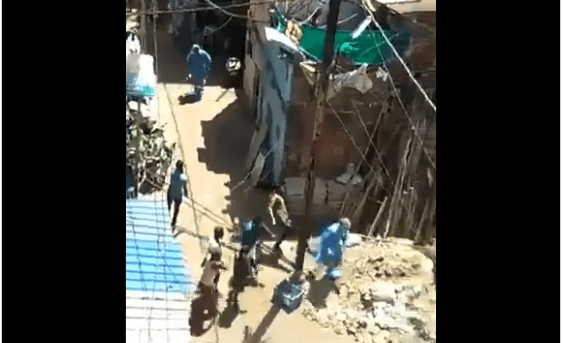 TNI Bureau: In a shocking development, Healthcare Workers and Civic Officials in Indore, were attacked by an angry mob, who objected to any screening activities in their locality for COVID-19.

At least two women doctors were injured in stone pelting. However, no grievous injuries were reported and the Healthcare workers escaped because of heavy police presence.

The incident occurred in Taat Patti Bakhal Muslim-dominated area in Indore yesterday. The angry locals were seen in the video, chasing the Corona Warriors and throwing stones, sticks and plastic canes at them.

Only a couple of days ago, locals in Ranipur areas of Indore allegedly spat on Health officials and abused them during the screening procedure.

At least two confirmed cases of Coronavirus have been reported from the Taat Patti Bakhal area. As many as 54 families have been isolated amid massive resistance from the locals. Indore accounts for 75% of all COVID-19 cases in Madhya Pradesh.