The Congress' official Twitter accounts, as well as the accounts of around 5,000 of its leaders and workers, have been locked. 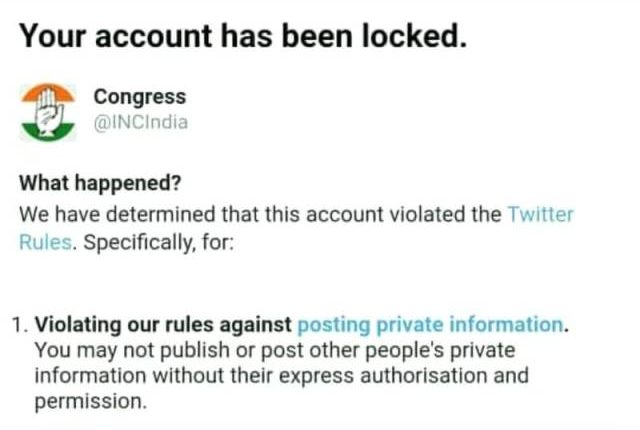 Insight Bureau:  The Congress’ official Twitter account, as well as the accounts of around 5,000 of its leaders and workers including Randeep Singh Surjewala and Ajay Maken, have been locked, the party claimed Thursday, amid mounting controversy over “selective” action taken against Rahul Gandhi and others for posting photos of  Gandhi interacting with the family of the nine-year-old Dalit girl who was allegedly raped and killed in Delhi the other week.

A screenshot of the Congress’ account was included in this morning’s Instagram post of IYC, along with a notice from Twitter saying it had been closed because it “violated Twitter rules” against publishing or broadcasting other people’s private information without their express authorization and permission.

Twitter has notified that its rules are “enforced judiciously and impartially for everyone”, and that they are taking “proactive action on several hundred tweets that posted an image that violated our Rules”.

“Modi ji, just how afraid are you? Reminder: The Congress party fought for our nation’s independence, equipped only with truth, non-violence & the will of the people. We won then, we’ll win again,” the party said this in reference to the Prime Minister.

The National Commission for the Protection of Child Rights apparently informed Twitter about particular information on the network that purportedly exposed the identify of an accused sexual assault victim.

Congress MP, Shashi Tharoor, the chairman of the parliamentary IT panel, has stated that he is “actively engaged with Twitter” to restore all accounts, accusing the BJP of “trying to undermine the opposition.” According to him, “I have taken a firm stand on this and am actively engaged to restore the accounts. It is a sad reflection… the way the BJP is trying to undermine the opposition.”

He also tweeted that, “The perception of double standards makes matters worse. When a BJP national spokesman posted a picture of the Hathras rape victim (violating Section 228A of the Indian Penal Code)  @Twitter did not lock his account. SC Commission posted a pic of the victim’s family 2 Aug;no action.”

“Action taken against a prominent Opposition leader raises obvious concerns of selectivity&bias. I urge  @Twitter to restore @RahulGandhi ’s account, review the policy of automatic suspensions & show more sensitivity to public concerns. Focus on what happened to the girl, not a pic!, ” he added.

It is prohibited under existing laws, such as the Juvenile Justice Act and the POCSO Act, to divulge a minor’s identify through any kind of media or to publish any material that may reveal his or her name.

The Congress, on the other hand, has reacted angrily to Twitter’s activities, accusing the government of intimidating the firm. Similar photos were also posted by accounts belonging to BJP Lok Sabha MP Anju Bala and the Scheduled Castes Commission, according to the party.

The Congress said no action had been taken against two other verified accounts that tweeted the identical photo – of the Delhi girl’s family – last week, while the account was still active.