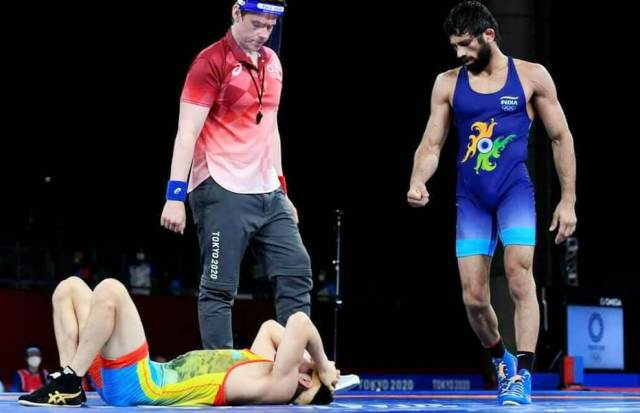 TNI Bureau:  In the men’s freestyle wrestling 57kg division, India is guaranteed of at least a silver medal when Ravi Kumar Dahiya made a stunning comeback against Kazakhstan’s Nurislam Sanayev to reach the finals.

The match got off to a tense start, with both wrestlers scoring points in the first few minutes of the first round. Sanayev, on the other hand, came close to winning the match when he scored 8 points in a row with the infamous ‘fitele’ move. Sanayez grabbed Ravi by the ankles and rolled him four times, giving him the 8 points and extending his lead to 9-2.

Ravi Kumar, on the other hand, made a spectacular return, cutting the Kazakh’s lead to 5-9 by pushing him off the mat. Sanayez was taken aback by Ravi’s manoeuvre, which caused him to injure his leg.

In the 1/8 final, Ravi Kumar defeated Colombian Oscar Eduardo Tigreros Urbano (13-2) and Bulgarian Georgi Valentinov (14-4) in the 1/4 round.