Mutaz Essa Barshim of Qatar and Gianmarco Tamberi of Italy's Olympic high jump fight was destined to end in a way the world would remember. 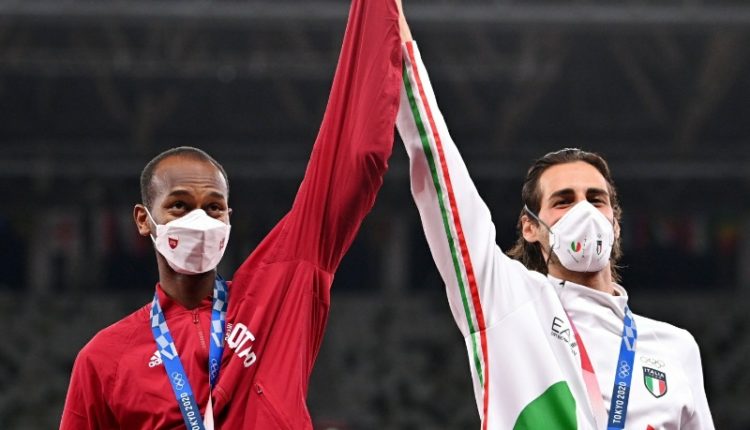 Mutaz Essa Barshim of Qatar and Gianmarco Tamberi of Italy’s Olympic high jump fight was destined to end in a way the world would remember.

Round each round, the two outstanding athletes were unable to outperform one another, leading to a TIE. The match official announced that the next phase would be a “jump-off,” in which the winner would have to simply outlast the other – a tie-breaker.

But then things took an unexpected turn, one that soon became a symbol of the Olympic spirit of sportsmanship and camaraderie.

Barshim, the event’s defending world champion, inquired the official, “Can we have two golds?” to which the official responded with, “It’s possible, yes.”  Rest is history. Tamberi was elated too. Instead of going into tie-breaker, they decided to share the GOLD.

The men’s high-jump event concluded without a silver medallist due to the shared gold. Maksim Nedasekau of Belarus won bronze, matching Barshim and Tamberi’s last leap of 2.37 metres, but with a lower total score due to a handful of failed jumps in the early rounds.

Barshim, 30, and Tamberi, 29, embraced and slapped hands in celebration of an improbable dual podium result. Even before speaking with the official, the two were hugging and congratulating each other on performing well at the Tokyo Olympics. On their first try, they both reached 2.37 metres (about 7.8 feet). They failed all three tries when the bar was raised to 2.39 metres, the Olympic record.

The once-in-a-lifetime combined Olympic championship grabbed headlines and sparked discussion online. Taking note of the overwhelming response, Barshim tweeted on Monday that the photographs of him and Tamberi had been the most popular in the globe for the past day.

They decided to share the Gold instead of going to a tie-breaker. #TokyoOlympics pic.twitter.com/jBuVcqIsXZ