This is a story about how a young woman wins her life back. 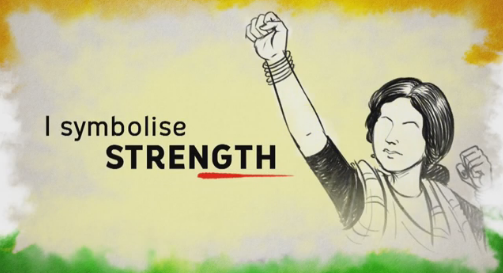 This is a story of a woman who made an empire out of nothing. When you hear this line, it might seem like any other normal story; but to me it is special. It is special because, this story belongs to my mother and I am a part of it. So, let’s begin.

Kamala was a young girl of sixteen, living in the village of Panchpura. Like any other kid of her age, Kamala liked to play, go to school, have fun with her friends, watch movies, and at times be naughty. Her life was pretty simple, and she loved it.

However on her 17th birthday, her life had completely changed. She was married off to a middle-class working man, who lived in the city. Kamala didn’t know what and what not to expect from the marriage. She was unaware of her duties, responsibilities, and also the things that would be cut off from her life.

Soon, she learned that things were suppose to be very different after marriage, she couldn’t be naughty anymore, she wouldn’t be allowed to play or make friends, she couldn’t even go to school. Her life revolved around the domestic chores. Kamala, was also a determined young girl, she embraced the life God had offered. So, after a year, Kamala was an expert in all household chores, in fact she had become a very cook.

Kamala’s day started at 5 o’clock in the morning, and ended at midnight. She used to wake up, clean the whole house, make tea for everyone, then breakfast, then lunch, then evening snacks, then dinner. Whatever spare time she could find in between cooking, she had to complete the other chores, like making the beds, moping the floors, and so on. She did everything, yet somehow could never make anyone happy. Or perhaps nobody ever knew how to express anything other than discontent towards Kamala. But, she was a fighter, no one could ever dampen her spirit.

In the afternoon, when everybody was done with their lunch, she used to have her meal and go to the terrace. She had brought a small sewing kit while coming from her parents’ house. Over the year, she had sewn quite a few handkerchiefs, and coasters. This was the only time she could relax, and dive into the serene moment.

After two years, of marriage Kamala had her first and only child, Kabir. She was elated the first time she held him, after a long, tiring labor. Her pregnancy had been so difficult, and medically complicated. Her husband had never shown her any sort of support. It was only in the last few days of her pregnancy that her in-laws took a notice of her, as she couldn’t do anymore household chores. Soon after her son was born, everyone went back to ignoring her existence. Her in-laws were totally consumed in themselves and with their newest member.

Everybody loved Kabir. He was the first grandchild, and that also a boy. Kabir was treated like a prince in the household. Even before he could ask for something, he would have it. He was pampered way more than imaginable. Nobody scolded him, or even raised their voice at him. If Kamala ever, tried to discipline her son, she was scolded infront of the little boy instead. At this point, for the very first time in her life, Kamala was scared. She was scared because she did not want his little five year old boy to grow up to be a heartless monster like her in-laws and her husband.

When Kabir started going to school, he was already a brat. But, Kamala couldn’t give up hope. Everyday she managed all her work, and made time to take her son to school. She also brought him back home. She always believed her son could be saved. He was just a child, his heart was pure, so, if she could bring even a tiny positive reinforcement in him, that could outgrow the evil that his father and grandparents had imposed on his mind. Kamala might not have had completed her formal education, but she was an extremely matured human being.

Kabir was not the only child in the world, and there was no extra credit in being born as a boy, he needed to understand that, and Kamala slowly, little by little tried to make him understand that. She always thought, there’s a big difference when something is being just blindly put into a child’s head and when something is being explained to him so that he understands. When you explain something to the child, you also give him a subtle option to make a choice for himselves. Kamala, was lucky and right enough to believe Kabir, he mostly made the right choices for himself.

Kamala was overjoyed and proud of her little son. The time that they spend together started making their bond stronger, and helped Kabir become a better human being. She knew her little insight on the small, maybe even insignificant things in life, had made an impact on Kabir, when he stopped his drunk father from beating Kamala up at the mere age of 10 years.
“You cannot beat maa up like this, paa.”

There was an innocence in his voice and a strange calmness. It didn’t seem like a young boy was saying it to his father. For a moment, it seemed the roles had reversed. Kamala couldn’t help but look at her son, with teary proud eyes. But, as days went by situations worsened. Soon, the in-laws realised Kamala was leaving a huge impact on her son. Kabir wasn’t growing up to fit their definition of a “man”. The moment their ideology was threatened they resorted to violence, this time not only on Kamala but also on little Kabir. Kabir’s father often started to beat him up to teach him a lesson, and make him a true man. Whenever, Kamala tried to intervene or save her son, she was also beaten up.

The sweet 16 year old girl, was almost lost under the brutal bounds of her in-laws and husband. Almost after twelve years, at the age of 28 years, the glow from her face was gone. She had become evidently weak, from lack of nutrition and proper care. It had been years since she had gone to her parents’ house. Two years back when her father had passed away, she wasn’t allowed to go, because her sister-in-law had returned from her in-laws house, and wanted to have mutton made by Kamala. Within six months her mother also passed away. During this time, her husband took her to Panchpura, in the morning and brought her back home by evening. Kamala couldn’t mourn the two biggest loss in her life. Anyone who saw her physical appearance, would say that she looked like a dead walking soul. But, anyone who saw her eyes would disagree. After everything her eyes still had life and held a fire in them. The only thing was that Kamala didn’t know how to channel this fire in the right way.

One random afternoon, Kamala, went out to get her son from school. But, unlike today she didn’t come get back to her in-laws that day. Kabir had asked,
“Where are we going, maa?”

“We are going to get away from those people, Kabir.”
“Are we running away? But, maa, you only tell me running away is bad, it is for the cowards. We should always bravely face every situation.”

“Yes, love, I did tell you that and I am still telling you that. But, we are not running away. We are going away to live the life God has given us. The day we become powerful enough, to stand and say a “no” on their face without being scared of getting beaten up, will be the day we come back.”

Kamala had kept her promise. When she had grown strong enough, she came back with Kabir. Ten years had passed in between. Kamala, had joined a small woman’s help group to get a shelter over her head. She worked in the tailoring factory in the morning and outside her one room shed, opened a small sandwich corner for selling sandwiches in the evening. Two years she worked day in and out, saved as much as she could, and with the accumulated money, she bought big utensils and gas stoves and started a home delivery business. Initially, it was like any regular home delivery business, she went to one office to another to serve the food. But, even though she was earning quite a bit more than before she chose to keep her lifestyle simple, so that she could save. She could save for a bigger venture. But, she was absolutely clueless about what it would be and how will she start it.

Finally, after five years of struggling, and delivering food from office to office, Kamala came across Malini. Malini was a sales manager in one of the office, she served food at. Malini lived alone in the city away from her home, so she loved Kamala’s cooking. She would often joke and say,

“The most exciting part of coming to office is this lunch made by you Kamala di.”

Malini helped Kamala set up her own business. She helped Kamala not financially, but in every other way possible. She taught her the right places to invest and kept getting her orders from outside the office. Slowly, she urged Kamala to give a name to her business and get registered. Kamala did so. After that she didn’t have to look back. Her business soon again popularity and she didn’t have to deliver food from office to office. People ordered food on her online a day before, for parties and other occasions, and got it delivered. She opened a small outlet beside Malini’s office called “Office Lunch”, so that no one ever missed out on a proper home-made meal.

So, after ten years Kamala returned to her in-laws place. Not to stay, but to prove that she never ran away. She went out to find herself, and create an identity. She had given Kabir the choice to go back if he wanted to, but he didn’t. Kamala hadn’t returned to stay. She was here to show them that she can and she did. She wasn’t defeated by them or the society. She stands tall and strong on her own. She had come back to tell them,

“I am not a part of this family, I had never been. A place where there is no love, no warmth, no respect, nothing, I can’t call that home. My family is my son. Here, are the divorce papers, please sign them. That is all. I have won my life back.”