Shocked at this they decided to transfer the patient to Aspire hospital, Bhubaneswar, where he was seen by Dr. Amitabh Jena, and emergency surgery was done during which it was noticed that he has an advanced cancer  arising from the appendix with intestinal obstruction. 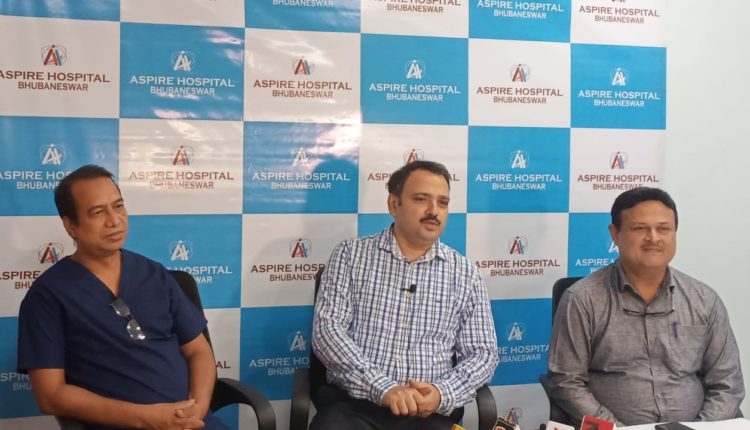 Insight Bureau:  Roy (76 years old) who was admitted in a nursing home at Cuttack with complaints of severe abdominal pain, evaluated there and relatives were counselled about less chance of survival. Shocked at this they decided to transfer the patient to Aspire hospital, Bhubaneswar, where he was seen by Dr. Amitabh Jena, and emergency surgery was done during which it was noticed that he has an advanced cancer  arising from the appendix with intestinal obstruction. As it was an emergency, his intestinal obstruction part was taken care of and was evaluated further for definitive treatment. After his clinical and nutritional aspect improved he was once more evaluated by a team of experts comprising Dr. Sudeepta Kumar Swain & Dr. Amitabh Jena and was planned for a specialized surgery for advanced cancer of the appendix involving the peritoneum, and simultaneous chemotherapy (HIPEC).

The team led by Dr. Sudeepta Kumar Swain (Robotic Gastro surgeon, Apollo Main hospital, Chennai) & Dr (Prof.)Amitabh Jena (Senior Oncosurgeon, Aspire Hospital) took up one of the most challenging cancer surgery which involves removing the tumor, part of intestine along with omentum and whole of peritoneum followed by intraoperative peritoneal chemotherapy at a higher temperature for better tissue penetration and less adverse effects called HIPEC. As per him this kind of surgery as well as the HIPEC is being done for the first time in this region. He explained that the HIPEC is very useful in certain advanced cancers of stomach, Colon & Rectum, Appendix as well as ovary. It provides better chance of cure, increased life span & better quality of life. Dr. Sudeepta mentioned that Aspire Hospital is very well equipped to deal with all kinds of cancers, complex surgeries and is well supported by ICU and postsurgery rehabilitation programmes. Dr Sudeepta thanked his team members, Dr. Amitabh Jena, Dr. Biranchi , Dr. Rajendra, Krishna, Prakash, Puspa  & Madhu for helping him in this challenging high risk surgery.

Dr. Amitabh Jena, who is well known for his oncosurgery work in Odisha, mentioned that Aspire Hospital is founded and managed by a team of highly skilled and committed doctors of various specialties who want to bridge the trust deficit that exists between health care givers and patients, and Trust is the cornerstone of this hospital.