With the century, the young player became the first one to score triple century against the same team. 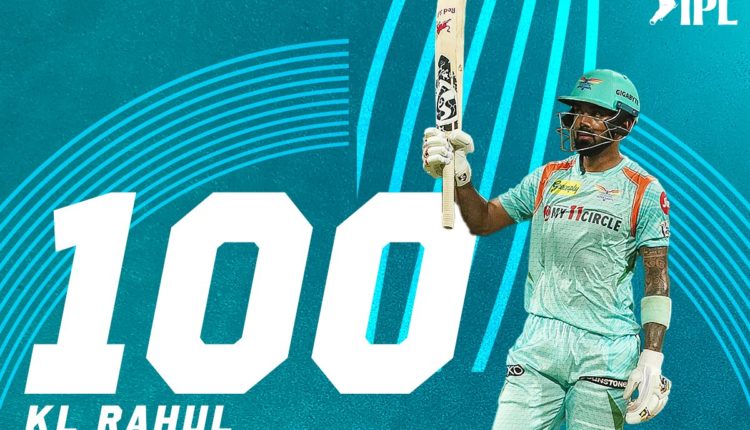 Insight Bureau: Lucknow Super Giants (LSG) captain KL Rahul smashed an amazing century in the 37th match of the IPL 2022 against Mumbai Indians (MI) at the Wankhede Stadium in Mumbai on Sunday, April 24. With the century, the young player became the first one to score triple century against the same team.

MI bowlers have had to endure a lot of pain through the season, but none more than what KL Rahul’s bat inflicted. The LSG skipper batted through the innings to bring up an unbeaten 103 (62b, 12×4, 4×6), his second ton against the same opponents in this IPL.

Despite wickets falling at the other end, Rahul appeared to be batting on a different wicket, picking up the scoring tempo at will and repeatedly taking advantage of the shorter side, collecting many boundaries square of the wicket. On a day maximums were proving difficult to come, Rahul began playing with the field with his ground strokes.

Come the death overs, he collected two fours off Riley Meredith’s 18th over, then three off consecutive balls in the 19th bowled by Jaydev Unadkat. 52 runs in the final five overs helped LSG take their total to 168.

Even the MI itself could not stop itself from shouting out for KL Rahul. Well played, it tweeted from its official Twitter handle.

A century for the LSG skipper.

KL Rahul is currently just behind Jos Buttler in the list of leading run-getters in the 15th edition of the tournament. Rahul now has 368 runs under his belt in 8 games at an average of 61.33 and a strike rate of 147.79, including two hundreds and one fifty.

He also joined an elite group of batters to have scored multiple centuries in one IPL season.

Rahul also joined Kohli as only the second batter to score two centuries against one opponent in the same season.

Fans have started pouring kudos to the players. Some have also praised his ladylove Athiya Shetty for encouraging the player to be better with each match.

So call it Athiya’s unconditional love and support or his passionate transformation, KL Rahul is surely gonna do more and more miracles in the upcoming matches.