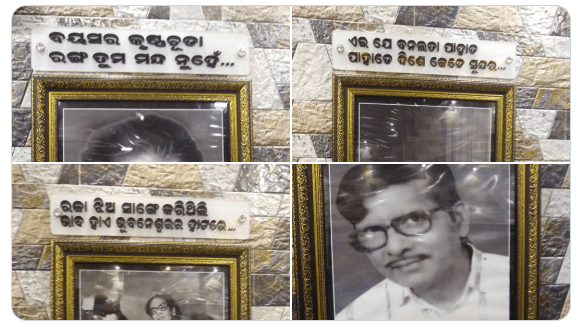 TNI Bureau:  As fans celebrate legendary singer, lyricist and musician Akshaya Mohanty, popularly known as Khoka Bhai’s birthday today, a restaurant in Baripada pays rich tributes to him by showcasing his 9 portraits on the wall.

Twitterati Ashish Sarangi took to Twitter and shared photos of all portraits taken during his recent Baripada visit.

The owner of ‘Hotel Garma Garam’, Jogeswar Behera told Ashish that his father, late Mr. Kartik Chandra Behera, was one of the great fans & close friend of Khoka Bhai and whenever the singer got the opportunity to visit Baripada, he used to come to the restaurant.

But the thing that attracted me was the photos of legendary singer Akshaya Mohanty or #KhokaBhai. I saw 9 portraits of Khoka Bhai in that restaurant.
Oh My God.
The owner must be his great fan, the sudden thought came to my mind. #BaripadaDiaries #AboutOdisha #ExploreMayurbhanj pic.twitter.com/7nXFd6Ak5X