Lovlina Borgohain (69kg), a debutant, ensured India an Olympic boxing medal when she beat former world champion Nien-Chin Chen of Chinese Taipei to reach the semifinals of the Tokyo Olympics. 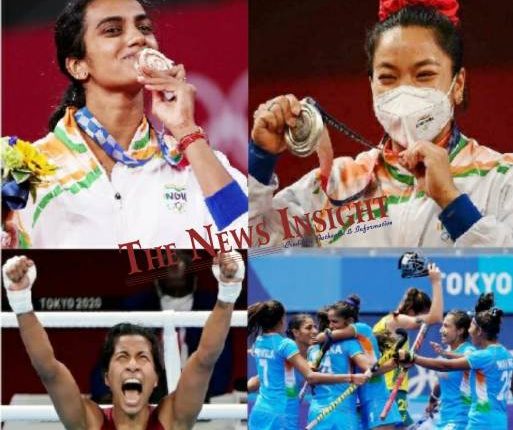 TNI Bureau:  This year at the Tokyo Olympics 2020, Indian women have been causing a stir on the world’s largest and grandest stage of sport.

The Olympics have come a long way from being a place where women were not even permitted to compete, and we have seen a slew of really successful female Olympians emerge throughout the years. Seeing how the country is being dragged up the Olympic ladder by its women is a source of immense pride in a culture entrenched in biases towards women, especially those active in sports.

While we’re on the subject of superwomen, PV Sindhu has clearly demonstrated why she is one of the best by winning medals in two consecutive Olympic Games. PV Sindhu was hoping to improve on her silver medal from the Rio Olympics, when she lost to Spain’s Carolina Marin in a tense final, by winning gold in Tokyo.

Tai Tzu-ying of Chinese Taipei, the world’s number one, thwarted her gold medal hopes. PV Sindhu quickly refocused and went for bronze, which she won with zeal, defeating He Bingjiao in straight games. Sindhu becomes the first Indian woman to win two Olympic medals, and the second Indian to do it after Sushil Kumar.

Lovlina Borgohain (69kg), a debutant, ensured India an Olympic boxing medal when she beat former world champion Nien-Chin Chen of Chinese Taipei to reach the semifinals of the Tokyo Olympics.

The 23-year-old Assamese boxer won 4-1 to go to the semifinals, where she will face defending world champion Busenaz Surmeneli of Turkey, who beat Ukraine’s Anna Lysenko in the quarterfinals. Borgohain, a two-time world bronze medalist, remained composed in the face of a tenacious opponent who had previously defeated her.

Mirabai Chanu exceeded expectations by capturing the country’s first Olympic medal this year at the Tokyo Olympics , a silver, in a competition against the finest in the world. Chanu, who is just 5 feet tall, maintained her composure and persevered while demonstrating the tremendous effort she put in to get into peak condition, as well as her incredible core strength. Mirabai really shined in her specialty Clean and Jerk, when she won a silver medal on her first lift.

By qualifying for the Olympic Games semifinals, the Indian women’s hockey team made history. The Indian team advanced to the quarterfinals by a lone goal against three-time victors Australia.

The Indians women’s victory came only one day after their male counterparts qualified for the Olympic semifinals after a 49-year wait. India faced world number two Australia, who was undefeated in the competition, in a match where the odds were stacked against them.

Kamalpreet Kaur, a Punjabi athlete, lived up to her pre-tournament hype by qualifying for the women’s discus throw finals with a monster throw in qualification. With a throw of 64 metres, she was just the second of 31 athletes to earn direct qualification.

After an outstanding performance, Indian boxer MC Mary Kom was defeated in the Round of 16 in the Women’s Flyweight division by Colombian Ingrit Valencia. Pooja Rani advanced to the Women’s MiddleWeight Quarterfinals but was defeated by China’s Q.Li. Deepika Kumari of India lost her quarterfinal match in the women’s individual event at the Tokyo Olympics on Friday against top seed An San of South Korea.