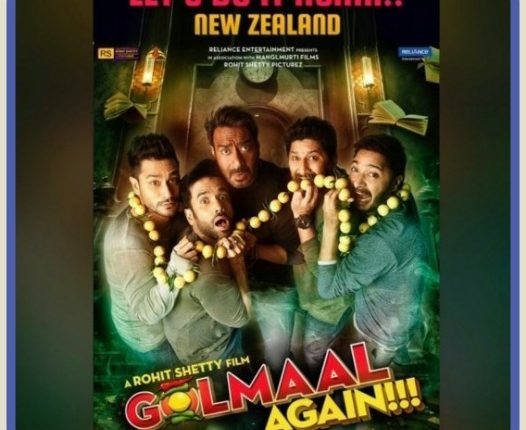 TNI Bureau: Rohit Shetty, the Indian film maker recently announced that “Golmaal Again” is set to be relaunched in New Zealand on June 25, 2020. This would become the first Hindi movie to be re-released post Covid 19 shutdown in New Zealand.

“Golmaal Again” is the fourth and latest segment in the Golmaal movie chain starring an ensemble cast of Ajay Devgn, Arshad Warsi, Tusshar Kapoor, Kunal Khemu, Shreyas Talpade, Johnny Lever, Parineeti Chopra, Tabu and Neil Nitin Mukesh. It was released in 2017 in India and received superb response at the box office earning over 300 crore and becoming the 5th highest grossing Bollywood movie of all times.

New Zealand had declared itself “Corona Free” two weeks ago. Even though a few cases surfaced soon after that, life in New Zealand has begun to return to normal.