Ghumura is a folk dance of the Kalahandi district 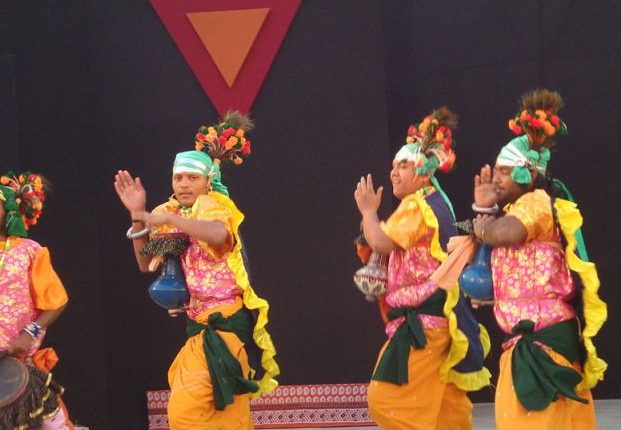 TNI Bureau: Odisha is famous for its exponential folk dances. One such dance art, ‘Ghumura’ is a folk dance of the Kalahandi district. However, the origination of the dance form is disputable as it resembles the other classical dance forms in India.

Additionally, it segregates the dance from others is the non-correlation to the other folk forms of India. It is widely performed in the Western Odisha, Koraput, Bolangir, and some Odiya speaking regions of Chhattisgarh.

However, Kalahandi is known to be the ‘land of Ghumura.’

The term Ghumura refers to the pitcher of soil/clay. It is one of the important props of the dance. The significance of the dance form is that it promotes brotherhood and unity.

There are several paintings carved out in the Kalahandi. It is believed that the dance was once performed in the river valley of Indravati. Later then spread to the surroundings. The carvings of the painting mark that the dance form belongs to medieval times.

There are various mythological stories behind the origination of the dance. In 1954, the poet Kandara Pradhan wrote Ghumura Janma Bidhan. Ghumura is a combination of Shiva’s damru and Swaraswati’s Veena to kill Mahishashura. Other folklores depict that Ghumura is in some classic tales like the Mahabharata and the Ramayana. The instrument produced war music in tales like the Ramayana in the Lanka kingdom.

There are various movements and forms involved in the dance form

What does the dance signify?

Apart from promoting unity, the dance signifies the valour of the soldiers to achieve victory in the war field. Furhtermore, the dance is famous as a ‘war song.’

Attire and the sequence of Ghumura

With colourful dhotis wrapped around the waists, headdress with motif and colourful shirts having Ghumura hanging from their backs along with other traditional instruments, the players place themselves at the centre. They control the tempo and indicate the changes in the movements of the other dancers. After a brief sequential rhythmic dance, all dancers move in a concentric circle and stand in a queue. Meanwhile, the singer praises the goddess Saraswati and other gods and then the music stops for a moment. After the prayer songs, the singer sings other literary folk songs.

The couplet of a song follows; and after the end of each couplet, the singer adds ‘Takita Dhe,’  a numeric syllable for the time-beat. It is an indication of dance to begin.

There is no female participation in the dance.

The dance embellishes the history of Odisha. Every year,  people celebrate the Kalahandi Utsav Ghumara to mark the importance of the traditional folk dance.