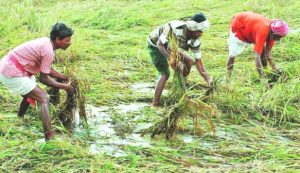 TNI Bureau: Is Farm Loan Waiver only solution to address the farmers’ problems? What would be the ramifications? It was our debate topic on Facebook and you have answered below.

Kailash Behera – As a senior retired banker, I would say that farm loan waiver is a suicidal step for the banking industry. It encourages willful default and chokes the flow of financial growth. Yes, the loan waiver scheme will be beneficial if it’s judiciously implemented in worthy cases where the default is made because of reasons beyond the capacity of farmers. But unfortunately it never happens.

Instead of popularizing this vote catching tool, the planners should emphasize on long term sustainable schemes like irrigation, free power, subsidized farm machinery, number of cold storage, goddowns, alternative agri-linked activities, forward and backwards linkage. And, last, but not the least, the schemes should be implemented by some sincere bankers and not by middlemen.

Girija Mishra: The issue needs to be viewed in an overall perspective.

(1) What is the total quantum of loans waived and/or bad debt provisioned for the fiscal by the State and what percentage of it is constituted by the said waiver?

(2) Is it a one-time waiver with proper documentation to ensure that habitual offenders do not misuse the same, or is it intended to be a repeat mechanism to allure the electorate?

(3) What proactive steps would be initiated by the Govt to ensure that such large or hard earned tax payers’ money isn’t channelized towards freebies/gimmicks/electoral gains?

(4) Unless the sole motive is electoral gains, at least three to four independent agencies/statutory auditors need to be roped in to see implementation of the decision in an impartial, fair and objective manner. Just a few pointers; there would be many more, delving deep.

Need to add this: India’s still a largely agrarian economy, though necessary interventions to make agriculture decreasingly dependent on factors beyond control of farmers’ are neither being mooted nor implemented with fervor… Banks and financial institutions that fund SOHO/SME/MSME and Industries, factor in a certain percentage towards NPAs/sinking fund each year. That’s because it’s part of their planning exercise. Similarly, waiver of farm loans needs to be looked at as the equivalent of such measures. Provisioning, disbursement and audit – if at all it comes to it – needs to be done by banks/ statutory auditors and agencies in a structured and sustainable manner with end to end control in lieu of the current practice of being deployed as a populist measure by political parties.

Suvendu Mohapatra: Farm loan waiver is the worst solution, as in our country only 7 crore people file tax & the beneficiaries are 125 crore officially (unofficially 150 Cr+). This is scary situation for any country. To give world class infrastructure, best healthcare, best education, transportation, roads etc, you need 100% participation from the citizens’ side. The solution would be giving them best technology for better cultivation like in Israel where the farmers could cultivate four times in a year, but we do it twice in a year and face a lot of challenges like natural disasters, Climate changes etc.

One sensitive point is out of these farm loans, some are using this money in marriage / in shaping up their homes or in many other social gatherings , which needs to be monitored by specific departments & and guilty should be penalized so that real farmers get the benefits.

Suman Biswal: In Odisha, the number of farmers, who take loans from banks for cultivation, is very less. In villages, mafia and brokers take the loan to get subsidy or full exemption. They keep putting pressure on the government to get undue favour. Such cases should be properly investigated.

Anirudha Nayak: The farm loan waiver is not the complete solution. The freebies offered by the government to people, including Re 1 rice, are making them lazy. This is one of the key reasons for migration of labour. The farmers are seen taking loans in the name of agriculture, but they are not using the money for the same purpose. Waiver would help the farmers involved in unfair means, while the needy will still remain deprived of the benefits.

Jagannath Satapathy: Farm loan waiver may not be a good tool, but an effective tool to polarize vote bank, instead of improving India’s economy. However, the ruling party must be desperate to appease the farmers to retain that vote bank and beat anti-incumbency ahead of the polls. People are so addicted to the freebies that no government shall make a suicidal move, by not acceding to the demands made by farmers.

Gyan Ranjan: Around 80% farmers are small and marginal farmers with less than 2 hectares of land holding who really deserves support; but don’t get access to the bank loan facilities. They often fall prey to local money lenders with higher interest rates. In case of crop loss, they end their life due to fear of harassment by lenders. The government should reach out to these farmers.

The problem is we just talk about digits without analyzing the data and it just politicizes the matter further.

Our Govt should focus on:

(i) Providing direct Market access by removing long supply chain from Farmers to consumers. Ex-Consumers are buying onion at Rs 20 per kg, while farmer gets less than one rupee.

Laxminarayan Kanungo: Farm loan waiver may be a short-term solution as subsidy to farmers in the country is only 3.8% of the subsidy given to industrialists yet. Rather, farmers should be provided with a monthly pension of Rs 5000 to make the economy more vibrant. Besides, they need better market-linkage, more agro-based industry in the area of their production like China.

Sambit Nanda: Not at all. Waiving farm loan is not the permanent solution to completely eradicate farmers’ issue. Rather, govt shall focus more on providing them modern technical ways of farming and a well synced market network.

Dilip Kumar Joshi: This Farm loan waiver may be temporary relief for the defaulted farmers. But what’s about those farmers who genuinely pay their loan? Is there any incentive scheme for them? Hence, the better way is to address this issue through permanent solutions such as adequate infrastructure, subsidies electricity, irrigation & creating market for their product.

Ajit Dash: We the people only compensate that 50,000 crore from our taxes. It’s a suicidal step. No political party gives it from their pocket. And, our people are addicted to free commodities and freebies.

Barada Prasada Khuntia: Technical support as well as appointment of agricultural exports at village level could be a notable step towards finding a solution. The more we involve them, it will definitely pave the way for better solutions.

Smita Panda: This is only a short term solution and in the long run, the liabilities pile up. One way of improving their financial condition is to increase their accessibility to markets. Rogues and middle men amass money whereas the poor farmers are paid peanuts for all their labour. Just imagine onions are being sold at Rs 25 per kg and the poor farmers are getting only Re1! Moreover, the Govt should provide infrastructure like storage and warehouses.