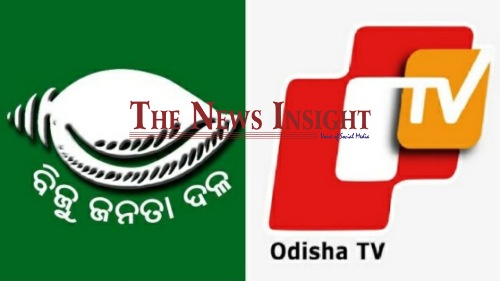 TNI Bureau: Media fraternity in Odisha were left shell-shocked yesterday when Senior OTV Journalist Ramesh Rath was picked up and taken to an undisclosed location.

Hours later, “sources” revealed that he was detained by Keonjhar Police in connection with the 2019 obscene viral (fake) video case involving Lok Sabha MP Chandrani Murmu. But, the confusion prevailed. Although Ramesh Rath was released a few hours later, that news failed to grab public attention.

Majority of the Journalists did not approve the way Ramesh Rath was treated and picked up like a “goon”. They believed that Ramesh was being hounded in the ego tussle between BJD and OTV Management. They suspect witch-hunting in this case.

Senior Journalists in National Media took strong exception to the detention and even called it an “abduction” and “arrest”. They are still under the impression that whereabouts of Ramesh Rath are unknown.

OTV and Pandas played it well to grab the attention of national media, while BJD miserably failed on that front. The BJD Media and IT Cell could not rise to the occasion. They probably lack a leader in Delhi who can take the national media into confidence.

While BJD may still get away with this, any statement by the Editor’s Guild will have a damaging impact on its reputation as well as clean image of CM Naveen Patnaik. This is not the Birthday Gift he is looking for.

Ramesh Rath’s detention may not have any big impact in Odisha where Naveen Patnaik remains unchallenged. However, with BJD losing the perception battle nationally, it won’t augur well for Naveen Patnaik. He won’t be happy at the widespread criticism from National Media.

Within hours he is picked up by the police and taken to an unknown place.

Distressing, the way Odisha Govt is going after one media group & its journalists. This is a terrible case of persistent intimidation. https://t.co/VJbe4Ul97l

Fit case for @IndEditorsGuild to take note. Some states have clearly escaped the kind of scrutiny that others such as Uttar Pradesh are normally subjected to. @otvnews @JagiPanda https://t.co/8FsCTc0uQa

Journalist Ramesh Rath forcibly picked up by police in Bhubneshwar; taken to an unknown place. That’s Pakistan/China style disappearance of journos. But not a whimper from Editors Guild or anybody else in the Indian journalistic fraternity. Tanishq was luckier; everyone ranted.

There is so much talk about media control by the central government – but not a whisper about press freedom in many opposition ruled states. It's like for Delhi journalists – there are 2 India-s one of BJP and another for the rest. @PandaJay @JagiPanda #OTV #Odisha https://t.co/BxEpks2dsI