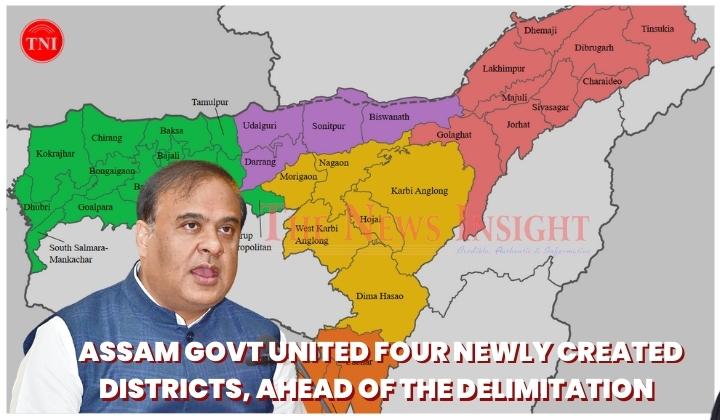 The state government of Assam united four newly created districts with those that were divided to form them on Saturday, ahead of the delimitation procedure in that state. The governor issued instructions for their merger with their original districts following the government’s decision.

According to an announcement from the state government the decision for the remerge was taken “for administrative simplicity and in the benefit of public service.”

Biswanath, Hojai, Bajali, and Tamulpur, are the four fully-fledged districts that were amalgamated with their original districts. The decision, according to CM Sarma, was made since the Election Commission (EC) banned moving administrative units within the state starting on January 1 in advance of the delimitation procedure.

“This decision is not final. Sarma told reporters without elaborating on the reasons, this is for a transition phase for administrative reasons and in the benefit of Assam keeping in mind its future.”

He claimed to have been in some of these districts for their official openings and that when time came for him to make this decision the state government had to have a good basis for making such a “major decision.”

“We regret having to make this hurried interim decision. I seek forgiveness from the people of these four districts. Sometimes you have to make harsh decisons, but we’ll pay the people back with dividends,” the CM assured them.

“Population Shouldn’t Be Only basis for Delimitation”- Assam CM

A day after the state cabinet approved the merger of four newly established districts with old ones in the state, Assam CM Sarma stated today that population should not be the main factor in the Delimitation of a constituency.

He added that the district merger was approved by the cabinet for administrative purposes rather than for delimitation. Delimitation will be slightly impacted, but only in the peoples’ favour, Mr. Sarma stated.

“There should be other’s criteria. However, we must follow the law passed by the Parliament in this exercise “In Guwahati today, he remarked.

The Chief Minister stated that districts have been instructed to manage population, but added that in some places, this instruction has not been followed.

The controversial National Register of Citizens, which had a similar objective, and the well-known Assam agitation, which demanded that the Centre identify, deny citizenship to, and deport “illegal aliens,” according to the CM, “could not protect the rights and future of the indigenous people.”

He added that the delimitation process is a non-political constitutional exercise that will be fair, based on statistics, and may rescue our society and protect demographic change inside the assembly.

The plan for the merger calls for the fusion of the districts of Biswanath with Sonitpur, Hojai with Nagaon, Tamulpur with Baksa, and Bajali with Barpeta.