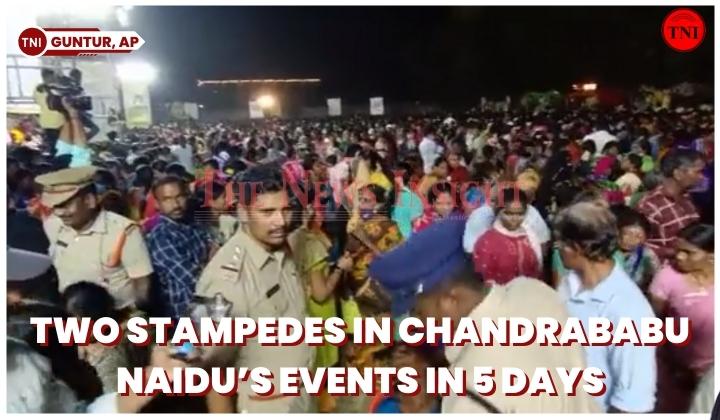 Three women were killed in a stampede at a rally of Telugu Desam president and former Andhra CM Chandrababu Naidu in AP’s Guntur district. This is the second fatal occurrence to occur at a public event hosted by Mr. Naidu’s Telugu Desam Party in a matter of five days. The party has been organizing a series of political gatherings across the state ahead of the 2024 assembly elections in the state.

Apart from the three confirmed deceased, several people were also hurt in the stampede, sources claim. Meantime, the party has not yet released an official statement. Earlier, the TDP said that each family of the deceased would receive Rs 10 lakh following the prior tragedy on December 28.

After the public meeting, local Telugu Desam Party leaders organized a programme to give out sarees to ladies as Chandrababu Naidu’s gifts for Sankranti, the harvest festival that will take place in two weeks. In order to collect the Chandrababu Sankranti Kanuka, almost 4,000 women gathered. So as to keep lineups, barricades had been put up. Dinner packets were being distributed on the other side. Suddenly, a barricade gave way, causing a stampede.

Eight persons, including a lady, were killed in a near-stampede on Wednesday in the Nellore area while the former Chief Minister was on a roadshow. As residents of Kandukur awaited the arrival of Mr. Naidu for a roadshow, some people fell into an open canal.

The meeting was eventually called off by Mr. Naidu and announced the families of the deceased a 24-lakh rupee compensation.

“This is a tragic event. I’m incredibly sorry about it. We’ll offer financial help, medical care to the injured, and aid with children’s schooling.” said Mr Naidu

After that, Mr. Naidu kept holding political gatherings, which drew criticism. The YSR Congress, which is in power, has harshly criticized him and labelled it “false PR.”

Taking a jibe at the TDP, CM Jagan Mohan Reddy said The Telugu Desam Party chairman has been held accountable for the fatalities, His “Publicity Mania” was the main cause for the tragedy.  He requested an immediate public apology from the party chief.

While, Mr. Reddy has expressed his shock over the tragedy in Guntur. He said, the authorities have been instructed to offer the injured people the best medical care available. He promised the families that the government would support them.

Ever Since Mr. Naidu has increased his frequency of regular political gatherings and rallies; Mr. Reddy’s party has been under pressure from long time. The large audiences at his events are interpreted as a sign of the TDP’s revival after the party suffered a humiliating loss in front of the YSR Congress in 2019.