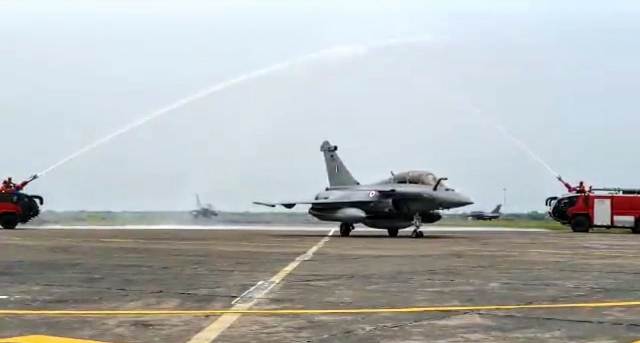 TNI Bureau:  The first batch of five Rafale fighter jets that took off from France on Monday has landed at the Ambala airbase in Haryana today. The Rafales were escorted by two Sukhoi 30 MKIs.

The five Rafale fighter jets have been accorded the ceremonial ‘Water Cannon Salute’ after landing at Ambala airbase.

The jets will be inducted into the IAF as part of its No 17 Squadron, also known as the ‘Golden Arrows’. A formal induction ceremony of the Rafale jets will be held around mid-August.

In September 23, 2016, India signed an inter-governmental agreement with France to purchase 36 Rafale jets under a Rs 59,000-crore deal to boost India’s air power.

Equipped with a wide range of weapons and high-tech sensors, the Rafale is intended to perform air supremacy, in-depth strike, anti-ship strike and nuclear deterrence missions. Rafales will also receive radar warnings to identify hostile tracking systems as well as a towed decoy system to throw off any incoming missile attacks.