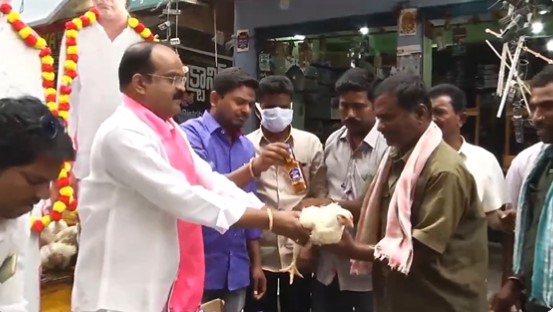 TNI Bureau: Ahead of the launch of a national party by Telangana Rashtra Samithi (TRS) Chief K Chandrasekhar Rao on the occasion of Dussehra on Wednesday, his party leader Rajanala Srihari was seen distributing liquor bottles and chicken to the public who had gathered in a long queue.

In a viral video, Srihari is seen distributing liquor bottles and chickens to people in Warangal.

The leader also posed for pictures with the people while giving away the goods.

The video has gone viral on social media.

With eyes on the 2024 Lok Sabha elections, Telangana Chief Minister K Chandrashekhar Rao is likely to announce his national party and its agenda.