A Kashmiri Pandit has once again ecome the target of terrorists' inhumanity. 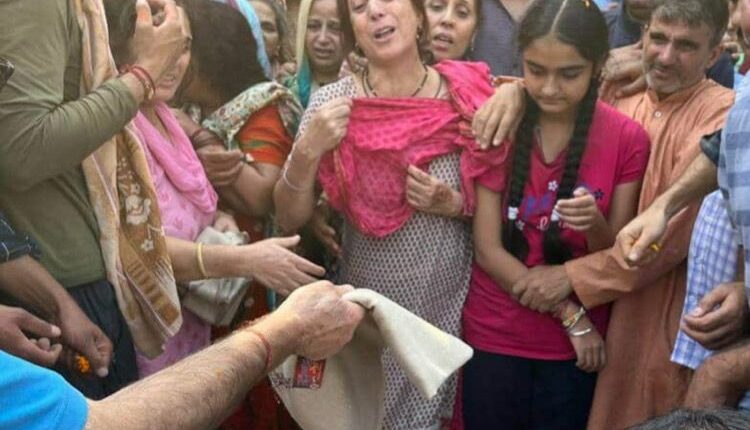 TNI Bureau: Emotions ran high as the mortal remains of a slain Kashmiri pandit were consigned to flames in Jammu and Kashmir’s Shopian on Sunday.

In yet another instance of targeted killing, a Kashmiri Pandit was shot dead by terrorists in Shopian district on Saturday.

Puran Krishan Bhat was gunned down by terrorists near his residence on Saturday in the Chowdhary Gund area of south Kashmir’ Shopian district.

The Valley has witnessed number of targeted killings. Several Hindus have been killed.

From May 1 to June 2 this year, terrorists have shot dead 9 people in targeted killings. The victims have been local policemen, Hindu and Sikhs as well migrant labourers.

Aaskash Mehra, owner of an eatery Krishna Dhaba was shot at on February 17, 2021 near his shop. The attack took place when the European Union delegation was in Kashmir to assess the situation.

On October 5 2021, Prominent chemist Makhan Lal Bindroo, the owner of a prominent pharmacy Bindroo Medicate was shot dead at his shop in Srinagar.

On October 7, 2021, school principal and a teacher were shot in Srinagar, two days after a pharmacy owner was killed by militants. school principal Supinder Kour and teacher Deepak Chand were killed after being identified as a Sikh and Hindu.

On April 4, Bal Krishan Bhat, whose family runs a medicine store in Chotigam of the district, was shot at by terrorists outside his shop.

A kashmiri Pandit who had got the job of a clerk under the special employment package for migrants in 2012-11, was shot dead by Lashkar-e-Taiba terrorists at his office in the Chadoora area of central Kashmir’s Budgam district on May 12.

There is no respite to the killings of the innocent Kashmiris. The Kashmiri Pandits are the soft targets to the militants.

It is a matter of serious concern and a big challenge to the government and the security forces.

So what is the use of their staying back in their birth place when they are being killed at their own land?